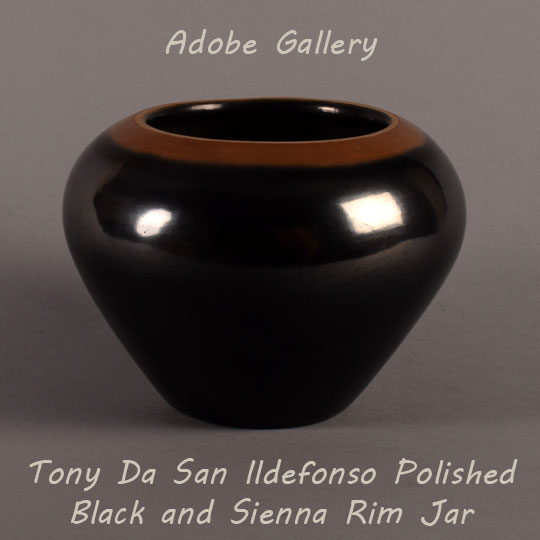 This magnificent and flawless stone-polished black jar with a sienna rim, which dates to the late 1960s or early 1970s, is an excellent example of Tony Da’s work in the years when he was living with his grandmother, Maria Martinez.  Its primary design is the sienna band circling the rim.  The top of the rim is a thin band exposing the natural clay of the jar.  The remainder of the jar has a mirror-finish highly-burnished surface.  No design was required to set this jar as a masterpiece.  It is signed on the underside with his DA hallmark.

Tony Da was born into a family of influential artists. He went on to become one of the most significant members of an incredibly talented family. Today, his works rank among the most valuable and treasured Native American artworks. The strong market for Da's works can be attributed to their beauty, of course, but also to their relative scarcity.  Da's potting career was short, and he is known to have completed only a limited number of pottery pieces a year. It is always exciting to have the opportunity to handle one of these rare and wonderful specimens.

Tony Da (1940-2008) Thun-Phoe-She (Sun Dew) was a gifted and influential potter, painter, and jeweler from San Ildefonso Pueblo.  His father was Popovi Da and his grandparents were Maria and Julian Martinez. Tony Da’s works are among the most collectible pieces of Native art, and not because of his family name.  Tony Da was an innovative genius, whose natural artistic abilities matched—and, in some areas exceeded—those of his ancestors.  Tony Da’s career was unfortunately sidelined by a motorcycle accident in 1982, when he was just 42 years old.  After the accident, he was unable to continue making the elaborate and beautiful pottery jars, bowls, and figurines for which he had quickly become so well-recognized, but he was able to continue creating works on paper.  Da passed away in 2008 and has come to be regarded as one of the most significant Native American potters.

Provenance: this Tony Da San Ildefonso Polished Black and Sienna Rim Jar is from the estate of a previous client of ours who had impeccable taste and purchased accordingly.