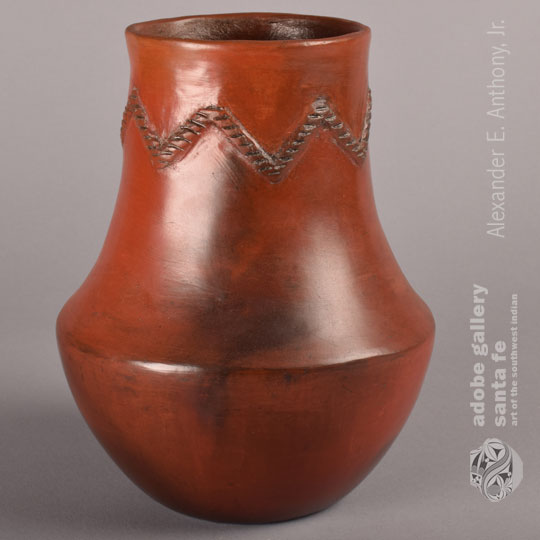 This beautiful golden-brown jar was made by Diné potter Rose Williams. In 2003, Williams and her daughter, Alice Cling, visited the University of New Mexico's ceramic studio to talk about their work. This jar is one of the four pieces Williams brought to the presentation.

The jar has a low mid-body point and from there rises a graceful tall neck, around which is a clay rope or biyó, which has a traditional line break, called an atiin, “the way out.”  Rose Williams explained the taboo against decoration and the reason for the break, as follows: “The Anasazi started to over decorate their pottery, and the wind destroyed them because of that.  That’s why we are told not to decorate pottery. The coils shouldn’t come together. That opening is for life. If you make it come together, it might shorten your life.” Rosenak 1994:35

The jar has a smooth polished finish.  The interior was slipped with piñon pitch in the tradition of functional Diné pottery.  The jar is signed with the initials RW.

Rose Williams (1915-2015) was a member of the most important family of Navajo potters, including her daughter, Alice Cling, and her aunt Grace Barlow.  Rose was trained by Barlow, and trained her daughter, Alice Cling, in turn; the three of them are credited with reviving the Diné pottery tradition during the twentieth century. By tradition, Diné pottery was used domestically or ceremonially and was characterized by a utilitarian aesthetic; the Williams family helped define the aesthetic of contemporary Diné pottery, enabling its inclusion in the growing market for Native American ceramics.

Rose Williams had 15 children, four girls and eleven boys.  Not surprisingly, she did not start making pottery until she was 40 years old, following the death of her husband.  She spoke the language of the Diné almost exclusively.

Provenance: from an Albuquerque resident who purchased it from Rose Williams when she exhibited four pottery vessels at UNM in 2003.

Original Photo image of artist that is with our Item #26191.