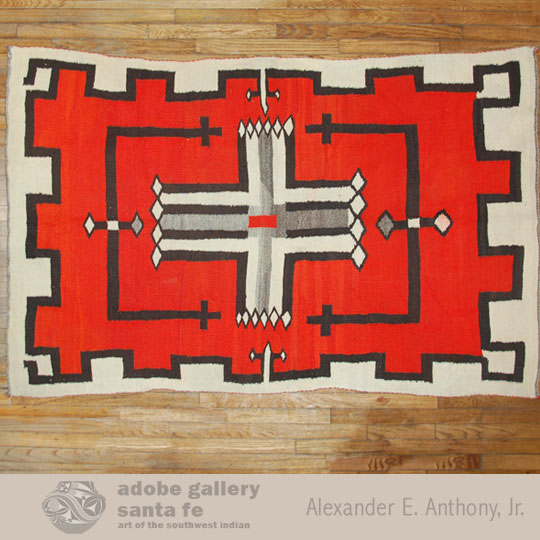 By the 1890s, the Navajo had returned from their imprisonment at Bosque Redondo and settled back onto their reservation land.  They had begun to acclimate to their new lives for which they had replanted peach trees, re-stocked their sheep inventory (although with Merino sheep) and settled into their control by the Federal Government.  Trading posts, run and operated by white men and their wives, were spreading over the entire reservation.  The Navajo had to adjust to deal with this new intrusion into their lives.

Everything was not negative, however.  The weavers found a ready outlet for their home looms.  Until that time, the women weavers were used to, and content with, weaving blankets for their use and to trade to the solders at Bosque Redondo who were their captors.  The traders, however, now wanted the women to weave rugs for the white market, a concept completely foreign to the natives.

Navajo blankets were of a size to comfortably wear.  Generally, they were of banded patterns in a horizontal stripe and with no border.  When the traders began asking the women to weave rugs, the weavers chose familiar banded patterns, enlarged the size, and made the yarn looser and thicker.  This lasted for 20 years or so before a more definite rug pattern developed.  This 20-year period has been recognized as a period of transition from blanket to rug and has been designated the Transitional Period of Navajo weaving, and the textiles from this period are known as Transitional Rugs.

This rug falls into the category of a Transitional Rug.  The materials are handspun native wools in the colors of cream, dark brown, variegated grey and aniline red dyed.  It dates to circa 1890-1910, the transitional period, and has a white border.  The design is bold with a center element of natural color yarns floating on a largely red background.  The few rows of weave at the beginning and at the end of the textile are grey in color.

Provenance: from the collection of an Oklahoma City resident who purchased it in 2004 from Morning Star Gallery, Santa Fe. 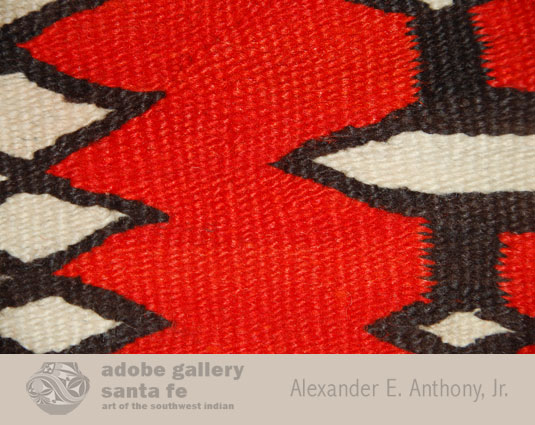 BETWEEN TRADITIONS: Navajo Weaving Toward the End of the Nineteenth Century [SOLD]
by J. J. Brody, et al.

Beyond the Loom: Keys to Understanding Early Southwestern Weaving [SOLD]
by Ann Hedlund