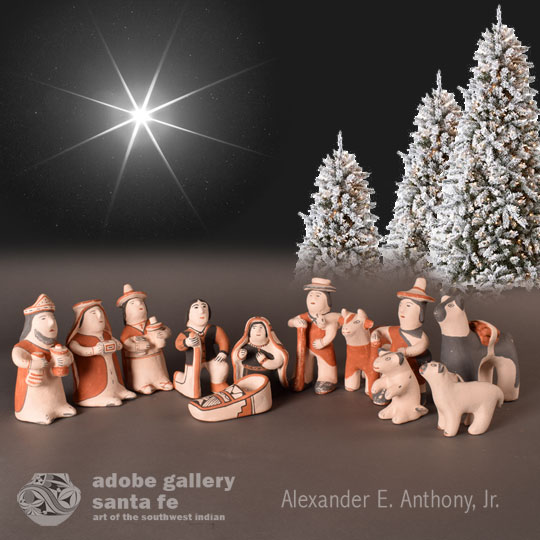 This rare 12-piece polychrome pottery nacimiento was made by now-deceased Cochiti Pueblo potter Felipa Trujillo. It was originally purchased in 2000 from a collection to be exhibited in the gallery’s annual nacimiento exhibit at Christmas season that year.  It was purchased by a client at that exhibit and is now being made available by her for an exhibit at the gallery in 2019.

The set consists of the three-piece Holy Family, three Kings, two shepherds and four animals.  Mary and Joseph are kneeling next to the Baby Jesus who is snugly in a cradleboard. Each of the kings appears with gifts for the Baby Jesus. The kings are dressed in Middle Eastern attire.  The shepherds each carry a staff and one has a lamb over his shoulder. Each of them wears a peasant hat. The animals are a donkey with a fagot of wood, a cow, a dog and a sheep.

Babcock also states that Trujillo began making storyteller figurines in the mid-1960s.  We know that Helen Cordero made the first one in 1964, so Trujillo must not have been far behind her.  Trujillo was one of the seven artists represented in the Museum of International Folk Art exhibit "What is Folk Art?" in 1973.  Again, it seems fairly obvious that Trujillo was one of the earliest potters to make storytellers. It is not known when she made the first nacimiento but there is one pictured in the book Nacimientos that is dated 1975.  Felipita stated that she was asked if she would make a nacimiento in 1969 and she said she would try. It is assumed, then, that she made her first one around 1970.

Condition: this Twelve-Figure Cochiti Pueblo Pottery Nacimiento by Felipa Trujillo is in very good condition with some abrasion of the matte pigments

Provenance: From a client in Oregon to whom we sold it in 2000.

- The Pueblo Storyteller by Barbara Babcock