Two Navajo Women Visiting in the Shade of an Umbrella [SOLD] 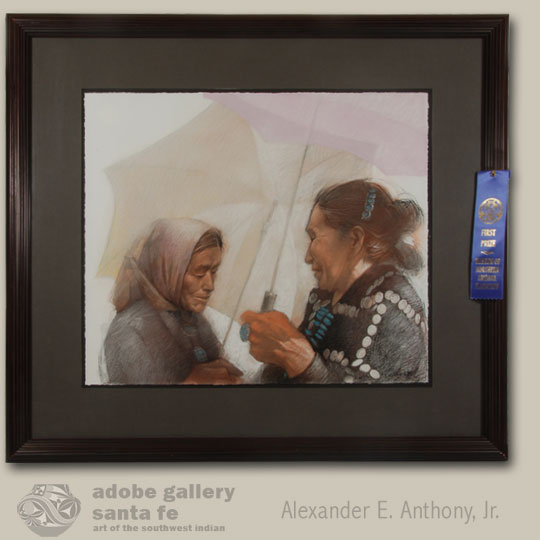 Clifford Beck (1946-1995) was the second of nine children born into a prominent Navajo family near Piñon, Arizona in 1946. He attended boarding school in Holbrook and graduated from high school in Flagstaff in 1964. His family valued education and he was one of the first young Diné to take advantage of tribal scholarship funds to attend college. He attended the California College of Arts and Crafts in Oakland, California whose art faculty included members of the Bauhaus school of design. There he was exposed to the work of impressionist artists, his favorite being Edgar Degas, whose use of pastels can be seen in Beck's work. He connected with other Native American artists living in the San Francisco Bay area who encouraged him. He had a two-man show with Patrick Swazo Hindsin Berkeley during his sophomore year.

After college he returned to the Navajo Reservation where he taught art at the newly established Navajo Community College in Tsaile, Arizona. During his time as an educator, he painted part time, and in 1978, he began painting full time.  His numerous awards include first prizes from Indian Market Santa Fe (1992 and 1994), Museum of Northern Arizona (1990), and the Annual Scottsdale National Indian Arts Exhibition (1975), and first place for drawing at Gallup Inter-Tribal Ceremonial and at Red Cloud Indian Art Show (1979).

This Native American Painting won the 1990 award at the Museum of Northern Arizona. It is rendered in the pastels for which Beck is known. In this piece, two Navajo women are visiting, sharing secrets or keeping up on each other’s families. Beck has drawn each woman’s face with painstaking detail, as if each face has its own personal history. They stand under an umbrella, shading them from the intense summer sun that is so common in Navajo Country.  The artist’s use of pastels brings out the turquoise jewelry of both women. The viewer’s eye is drawn to the traditional jewelry of both women. The turquoise hair barrette, nugget necklace, pins and rings contrast against the muted greys and browns of the women’s traditional clothing. The piece is signed by the artist and dated 1989.

Condition:  this painting of Two Navajo Women Visiting in the Shade of an Umbrella is in excellent condition

Provenance: from the collection of a family which is consolidating two homes into one and found it necessary to release some of their art collection. 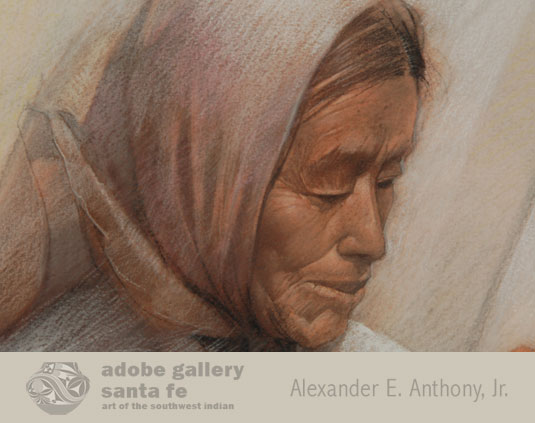