Unidentified Katsina Doll from the Past 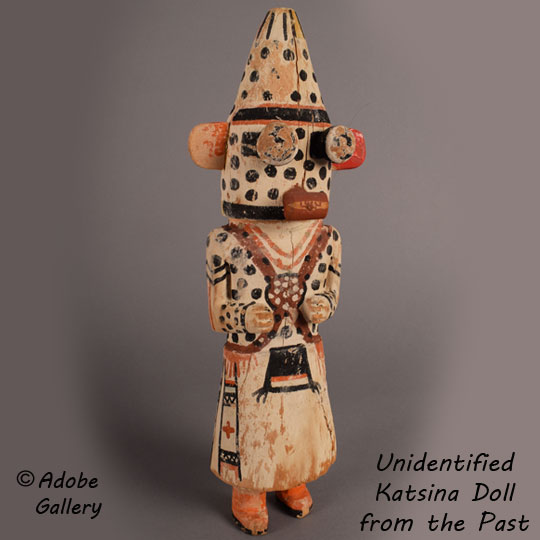 The katsina reflected in this carving has not yet been identified. It is an all-wood carving with pigments that appear to be a mixture of mineral and commercial sources. It appears to have a white coat of kaolin as the base pigment, over which paints of white and red were applied. There is a faint blue color on the sash.

We inquired about the identity of the katsina being represented and received information relayed from some Hopi sources. One comment was that the closest to what he could represent is Pö-ökang-hoya, one of the Twin War Gods, however that Deity does not have polka dots as appear on this carving. Another suggestion was that it could be a katsina that perhaps existed a hundred years ago, but no longer. Still another opinion was that it could have been made by an older Hopi who did not make dolls in their true identity so as not to offend his religious beliefs but made similar variants so he could benefit from a sale. We find this to be intriguing.

The doll was collected in the mid-twentieth century by the father of the current owner, but left no information when he passed away, so all we can do is speculate. All indications are that it is a legitimate Hopi carving, but not of a current existing katsina. The mouth is an item of confusion as it is of a shape that is not regularly seen on katsina dolls of the present, and it appears to have been freshly painted. It likely is an add on piece not original to the carving. The carving appears to be from the 1930s.

Provenance: this Unidentified Katsina Doll from the Past is from the daughter of the original collector

Reference: Hopi Kachina Dolls with a Key to their Identification by Harold S. Colton