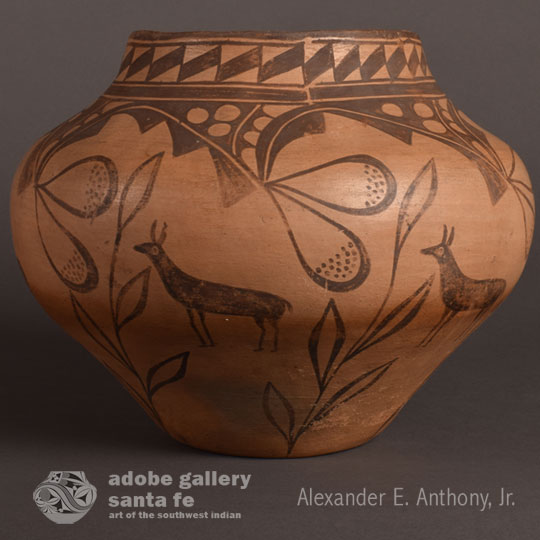 This historic jar by Zia Pueblo artist Rita [Salas] Shije Kayeiti is unique in design and color. The appearance of the brown pigment on the soft cream background slip is warm and appealing. The vessel shape is also different from that which is often seen at Zia Pueblo. It is another striking element of appeal.

The narrow base of the jar expands outward as it rises, then rolls inward and upward to a short rim. It is the combination of a beautiful vessel shape, dark cream patina, and enchanting design that set this vessel apart from others of its time period.

The design stretches from the base to the rim. It is light and fanciful rather than heavily oppressive. The red underbody traditionally applied to historic Zia jars was eliminated by this artist in favor of extending the cream slip to the base and using the extra space for design. Floral elements spring up from the base in the form of plants outlined in brown pigment and left unpainted on their interiors. The rim is filled with tilted brown bars enclosed within framing lines. Below the tilted bars is a wide band outlined in a pair of thin framing lines, all of which feature a ceremonial line break. Suspended from this are triangular brown elements, each with three circles, the element then surrounded by a long and graceful sweeping line of brown triangular clouds. The tip of this supports two graceful large unpainted leaves, outlined in brown and enclosing small polka dots at the ends. The jar is certainly one of the prizes from Zia Pueblo from the turn of the last century.

We know of Rita Salas Shije's work through a photograph by Edward S. Curtis and photographs of pottery by her from the R. M. Camp Company, 1922, and the Julius Gans Store, Santa Fe, 1921. The jars in these two photographs share a graphic layout of a significant area of undecorated space. The jar from the Julius Gans photograph has paired oval dotted-leaf forms at the terminals of the hatchuring that are identical to those on the jar in this presentation. There is no doubt that the artist of the two are the same. [ibid]

Provenance: from the private Colorado collection of a family from San Diego, California