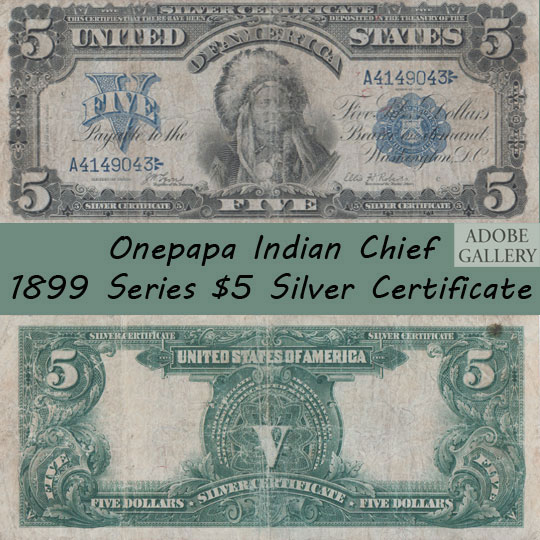 The series of 1899 five dollar silver certificates goes by many names.  It is sometimes called an Indian, chief, Running Antelope, or Onepapa. All of the names derive from the fact that there is a Native American featured on the front of each 1899 $5 bill.  This is the only piece of United States paper money ever to feature a Native American. The powerful engraving of Running Antelope or Tȟatȟóka Íŋyaŋke (1821–1896), a Chief of the Onepapa (Húŋkpapȟa) Lakota Sioux, is featured on this large-sized $5 currency note from 1899. This is the first and only time a Native American image was used as the central motif on any U.S. paper currency.  The Chief passed away in 1896, so he never got to see his likeness on United States paper money.

Few notes actually display pictures of Native Americans—this is the exception.  This picture caused a lot of ill will among the tribes of the Great Plains, because the Chief was pictured wearing  a Pawnee headdress as the original Lakota headdress was too tall for the engraving. Apparently the engravers at the Bureau of Engraving and Printing weren’t aware that the Lakota and Pawnee were mortal enemies on the Great Plains.  No one was happy about this portrait except the white folk, who just wanted to believe that this was what any Indian Chief looked like. This bill features an impressive rendition of the wrong-headdress-wearing Chief on the face. The bill contains a large blue seal and blue V overprint, and an elaborate reverse.