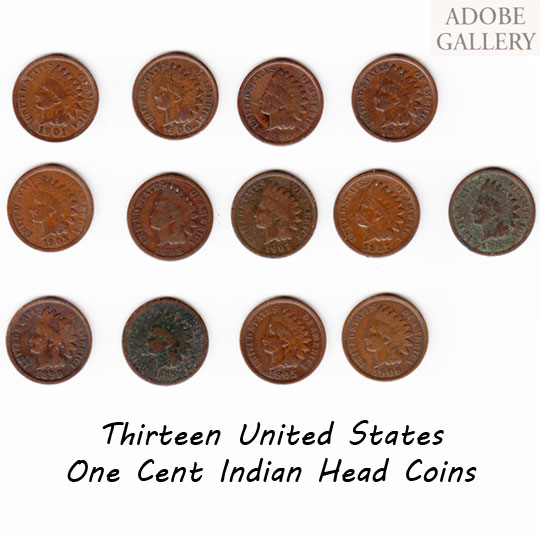 The Indian Head Cent, also known as an Indian Head Penny, was a United States one-cent coin ($0.01) produced by the United States Mint (the Mint) from 1859 to 1909. It was designed by James Barton Longacre, the Chief Engraver at the *Mint located in Philadelphia.

From 1793 to 1857, the cent was a copper coin about the size of a half dollar.  As rising copper prices made it impractical to keep striking them, in 1857 the Mint reduced the size of the cent, issuing a new design, the Flying Eagle cent. The new pieces were identical in diameter to modern cents, though somewhat thicker and made of copper-nickel. The design caused production difficulties, and the Mint soon looked to replace the coin.  Mint Director James Ross Snowden selected the Indian Head design, and chose a laurel wreath for the reverse that was replaced in 1860 by an oak wreath with a shield.

In the post Civil War period, the cent became very popular and was struck in large numbers in most years. An exception was 1877, when a poor economy and little demand for cents created one of the rarest dates in the series. With the advent of coin-operated machines in the late 19th and early 20th centuries, even more cents were produced, reaching 100 million for the first time in 1907.  In 1909, the Indian Head cent was replaced by the Lincoln Cent, designed by Victor D. Brenner.

By numismatic legend, the facial features of the goddess Liberty on the obverse of the Indian Head cent were based on the features of the face on a statue of Crouching Venus in Philadelphia on loan from the Vatican.  The face was not modeled by a Native American and it has definite Cacausasian features, capped by an Indian feather headdress.

In 1904, President Theodore Roosevelt wrote to his Secretary of the Treasury, Leslie Mortier Shaw, complaining that U.S. coinage lacked artistic merit, and inquiring if it would be possible to engage a private artist, such as sculptor Augustus Saint-Gaudens, to prepare new coin designs.  At Roosevelt's instructions, the Mint hired Saint-Gaudens to redesign the cent and the four gold pieces: the double eagle ($20), eagle ($10), half eagle ($5), and quarter eagle ($2.50). As the designs of those pieces had remained the same for 25 years, they could be changed without an act of Congress, as could the Indian Head Cent.

Famous writer Witter Bynner recalled that in January 1907, Saint-Gaudens was seriously ill with cancer, and was carried to his studio for ten minutes a day to critique the work of his assistants on current projects, including the cent.  Saint-Gaudens died on August 3, 1907, without having submitted another design for the cent.

With the redesign of the four gold denominations completed by 1908, Roosevelt turned his attention to the cent. The centenary of the birth of assassinated president Abraham Lincoln would occur in February 1909, and large numbers of privately manufactured souvenirs were already being issued. Many citizens had written to the Treasury Department, proposing a Lincoln coin, and Roosevelt was interested in honoring his fellow Republican. This was a break with previous American numismatic tradition; before the Lincoln cent, no regularly circulating U.S. coin had featured an actual person (as opposed to idealized personifications, as of "liberty").

*The United States Mint is a unit of the Department of the Treasury responsible for producing coinage for the United States to conduct its trade and commerce, as well as controlling the movement of bullion. It does not produce paper money; that responsibility belongs to the Bureau of Engraving and Printing. The Mint was created in Philadelphia in 1792, and soon joined by other centers, whose coins were identified by their own mint marks. There are currently four active coin-producing mints: Philadelphia, Denver, San Francisco, and West Point. [these are the "mint marks" that you see on U.S. coins today: P, D, S or W]. - Wikipedia

Condition:  nice appearances but no attempt has been made to classify each of the Thirteen United States One Cent Indian Head Coins by numismatic standards.