Untitled Scene of Hacienda with Horse on Road by Joseph Fleck 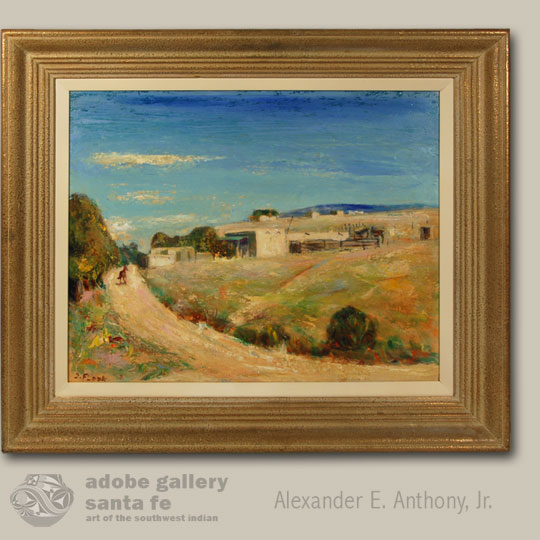 This Southwestern landscape by artist Joseph Fleck is a fine example of why his works have been sought by collectors.  There is no focal point here—it is a subtle, well-balanced image that doesn’t rely on movement or bursts of bright color to draw and keep the viewer’s attention.  The scene depicted here is a simple and peaceful one: a single horse on a dirt road, winding past a quiet Southwestern hacienda.  Fleck paid particular attention to the trees and hills surrounding the ranch, blending his colors together beautifully to give the scene an incredible amount of depth and dimension.  Behind the hacienda, a small cluster of houses occupies a hilltop. Beyond that, all the viewer sees is blue.  Fleck’s gorgeous blue sky evolves as it extends away from the hillside, from a simple light blue to a richer, darker blue.  The image is easily accessible and could be appreciated by anyone who gives it a cursory glance. However, a more focused study will reveal a surprisingly complex and elegant composition that rewards repeated viewings.

Joseph Amadeus Fleck was born of German speaking parents in the village of Sziklos, Austria-Hungary on August 25, 1892.  In 1922, he emigrated to the United States, arriving in Kansas City, Missouri. He began working at a stained-glass factory owned by Tiffany and Co, rising to the position of chief designer. His solid training in portraiture soon enabled him to receive many portrait commissions. Among the most notable of these were the portrait of Confederate General George Franklin Paxton, now hanging in the Museum of the Virginia Historical Society, and the portrait of Mayor Albert I. Beech of Kansas City. Both were painted in 1924.

In early 1924, Fleck visited an exhibition of paintings by members of the *Taos Society of Artists in a Kansas City art gallery. His curiosity aroused, he visited Taos in the summer of 1924. In 1925, he married Mabel Davidson Mantz and returned to Taos to become a permanent resident. Except for extended painting trips to Europe in 1926 and 1930-1931 and three years as Dean of Fine Arts at the University of Missouri at Kansas City, he remained a resident of Taos until 1973. He died in Pleasanton, California in 1977.  - Source: Joseph Fleck, Jr. via Ask Art

*The Taos Society of Artists was an organization of visual arts founded in Taos, New Mexico in 1915; it disbanded in 1927. The Society was essentially a commercial cooperative, as opposed to a stylistic collective, and its foundation contributed to the development of the tiny Taos art colony into an international art center. The six founding members were Joseph Henry Sharp, E. Irving Couse, Oscar E. Berninghaus, W. Herbert Dunton, Ernest Blumenschein, and Bert Phillips.  Other artists joined the group over the years.  Source: Wikipedia

Condition: this Untitled Scene of Hacienda with Horse on Road by Joseph Fleck has been professionally cleaned by an art conservator and some surface scratches in the oil paints have been repaired. 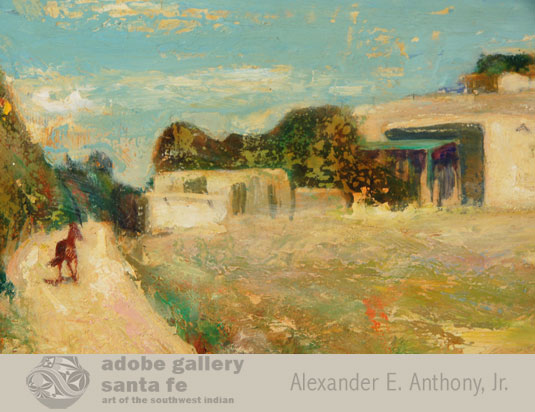