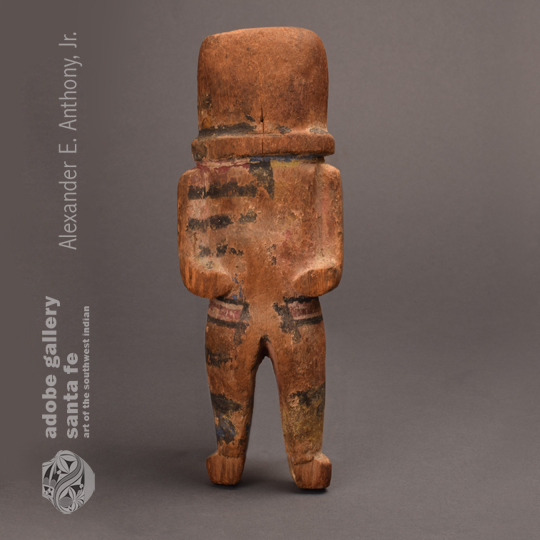 Fortunately, there is sufficient pigment remaining on this carving to identify it as representing a Left Handed Katsina.  It is an early carving, identified as such by the arms and hands tucked to the torso and the oversize face covering.  Many carvers make the mask the same size as the head in proportion to the body size, however, the mask should be larger than the head as it is a covering over the head.  Older dolls generally feature the mask in this larger manner, but later carvers have sometimes made the mask the size of the head.

The Left Handed Katsina is so called because he carries his bow in his right hand rather than in his left. In fact, he generally does everything backwards. The reason for this is not clear. The Hopi say he came to them from the Chemehuevi Indians. He appears quite frequently in a great many dances, like the Mixed Kachina, in groups in the kivas or separately as a warrior in the Powamu Ceremony. He may act as a prompter in a dance or be found making odd little bows and taking small mincing steps at the edge of a procession.  A great deal of the time he has trouble with Hó-e when they appear in the same dance. - Wright 1973

The carving appears to have been done with a knife, not electrical tools.  It is a one-piece carving, with no added appendages.

Condition: both feet have been partially broken and paint is missing from this Very Old Hopi Left Handed Katsina Doll.