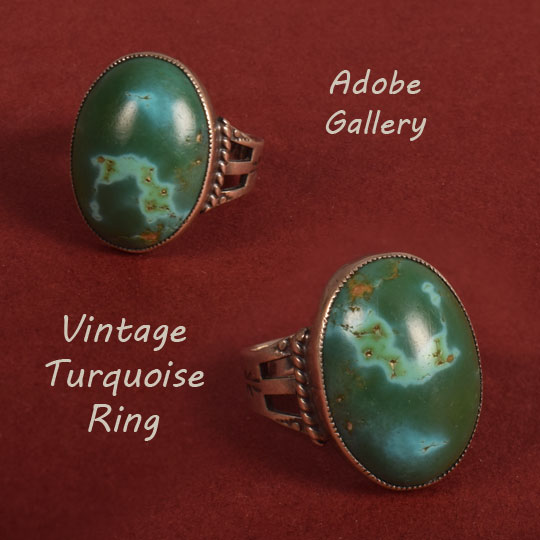 It is the stone setting in this Navajo silver ring that draws the eye. A light blue streak flows through the dark green cabochon in this mid-20th century ring. The unique stone is set on a split shank stamped with feathers as was characteristic of the Fred Harvey Company. The ring is unsigned as was common practice for the time.

In the late 19th century, when Fred Harvey opened his hotels along the *Atchison, Topeka and Santa Fe Railway from Chicago to Los Angeles, he stocked his gift shops with merchandise that was created with the esthetic in mind of the tourists who were traveling. The pieces that were made especially for the traveler to take home as a souvenir of their Southwest adventure were more delicate. They were not as expensive as traditional Navajo jewelry and appealed more to the tastes of the Southwest travelers. The souvenir pieces used fine, intricate stamp work to decorate the silver with added pieces of turquoise. Provenance: From an extensive Southwest Indian Jewelry collection in Colorado

- Skystone and Silver: The Collectors Book of Southwestern Indian Jewelry by Carl Rosnek and Joseph Stacey