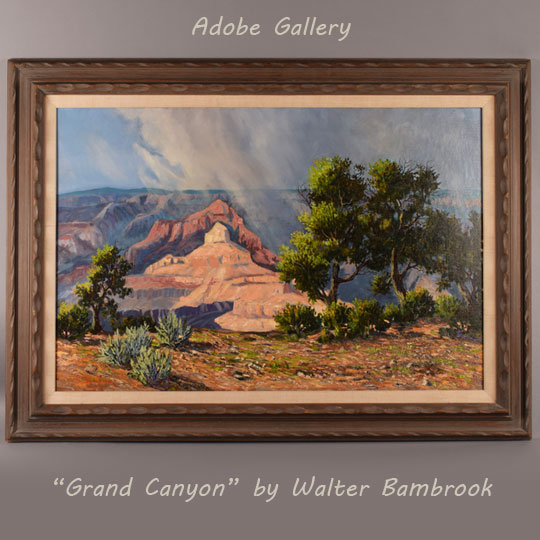 “Grand Canyon” is a large original painting by New Mexico artist Walter Bambrook. With this piece, Bambrook places the viewer near the rim of the famous landmark, looking past the edge of a cliff into the sprawling, cavernous canyon. The cliff’s edge rises in the foreground, obscuring the canyon’s depth. Trees and bushes line its border, providing a lovely blend of light and dark green tones. The ground here is similarly lively in color, which is welcome in an image that otherwise focuses on arid desert tones.

In the distance, Bambrook created a strong depiction of the majestic Grand Canyon’s massive walls. An enormous, sun-kissed rock formation stands in the center of the image. Elsewhere, shadows prevail, giving the steep walls a soft purple glow.  Smokey clouds roll upward, out of the canyon, and into the sky above, adding a nice touch of gray to the right side of the image. Bambrook did a fine job with this tribute to the Grand Canyon.

The painting is signed Bambrook in lower left. It is framed in a carved wood frame.

Walter Bambrook (1910-1984) was a painter who lived and worked in Albuquerque, New Mexico.  He attended Albuquerque High School and began his art education at the University of New Mexico (UNM) under the instruction of Ralph Douglas.  While at UNM, Bambrook served as a printer's apprentice for the Albuquerque Journal newspaper and began his four-year art training under Carl Von Hassler.  After his formal art education was completed, Bambrook taught many private classes and groups at UNM, the Woman's Club, and Heights Community Club.

Bambrook received his first award at the age of thirteen from a national art show at the Chicago Art Institute.  During his lifetime, he received many awards from other prestigious institutions, among them the L.O.M. Sweat Memorial Museum in Portland, Maine; the Colorado Springs Museum of Fine Arts; the Corcoran Gallery in Washington, D.C.; the Santa Fe State Museum; the UNM Galleries, and the New Mexico State Fair. His paintings are also found in private collections in England, Italy, Australia, the United States, and Indonesia. Bambrook continued to contribute to the New Mexico art community as the Director of New Mexico State Fair Exhibits, as a member of the New Mexico Artists' Equity, the Professional Albuquerque Artists' Guild, the Taos Art Association, and the New Mexico Art League.  Bambrook died on June 1, 1984, in Albuquerque, New Mexico.