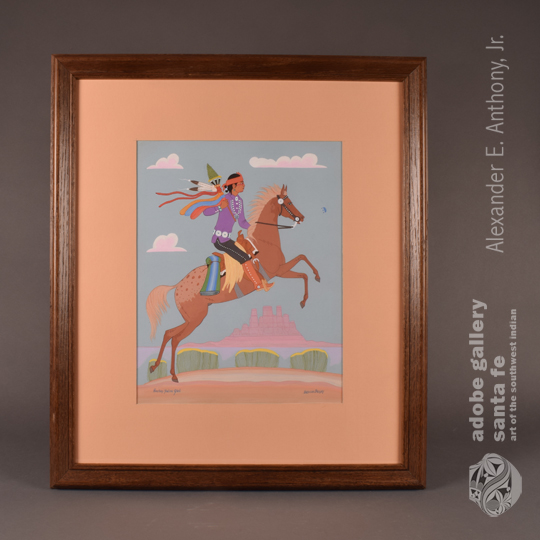 Clara Lee Tanner’s Southwest Indian Painting: A Changing Art provides a great description of Diné painter Harrison Begay’s strengths:  “Extreme delicacy becomes uppermost in this artist’s works with lines so fine that it seems impossible that they could have been made with a brush.  Coupled with this are the keen powers of observation of which the Indian has more than his share. In Begay’s work there is often the disciplined balance between the heavy formalities of inherited tradition and a warm realism which developed within a very short span of years...Begay evolved a style that is essentially his own, a style which influenced others, but which has not been equaled in perfection by any of those he has so greatly affected.  Lines that breathe rhythm; clean, cool, and sensitive coloring; a gentleness of figure; peace and calm throughout, from facial expression to composition; impeccable drawing, the best in Navajo art; simplicity coupled with realistic detail; few and conventional plant forms or other background effects; harmony and serenity—these and other more elusive traits and qualities are combined in the inimitable Begay manner.”

This extraordinary watercolor painting by Harrison Begay proves that Tanner’s glowing review was well deserved.  Begay’s subject here—a Diné man on horseback—is one that he painted countless times during his long career. This particular painting, however, is remarkable despite its common subject matter.  Begay’s horse and rider are front and center, as per usual, but their placement here is clever and extraordinarily attractive. The horse reaches from lower left to upper right, dividing the image in two diagonally.  Below the horse is the Navajo reservation, alive with the “warm realism” that Tanner mentioned in her book. Above the horse is a resplendently dressed man, carrying a wand with ribbon, yarn and feathers trailing behind.  Gorgeous pink and white clouds decorate the sky above him. Every detail here is sharp, refined, framed by brilliant linework and shaded with bolder-than-usual watercolors. Put simply, the image is lively, energetic, and enormously appealing.  It dates to the 1970s, a period which is considered by many to have been Begay’s peak. It is signed “Haskay Yahne Yah” in lower left, and “Harrison Begay” in lower right.

Condition: this Watercolor of Diné Man on Horseback is in excellent condition