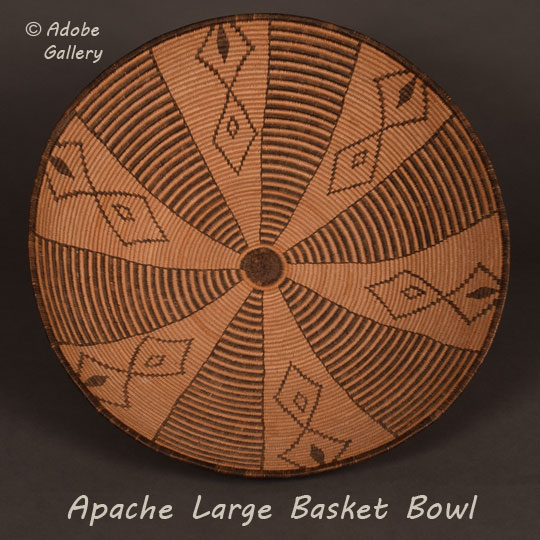 At first glance, one does not recognize that this Apache basket has some red included in the design. The amount of red the weaver chose to include is minimal, as if she wished to hide its use. She inserted red in the diamond patterns nearest the rim. If one counts down from the first row below the black rim, there is red in the triangles on rows 6, 8 and 10 on each of the triangles around the basket. Perhaps it was her way to identify her work.

This exceptionally large and beautifully executed Apache basket incorporates a complicated design executed in black and red colors. The starting coils in the bottom center incorporate the traditional black circle which, after a few coils, expands to the exciting design of alternating bands of bars and diamonds. The design sections with bars have their beginning near the center of the base. As the bands climb the wall, the devil claw band expands in width. The sections with diamonds are consistent throughout the basket.

Western Apache basketry of the late nineteenth and early twentieth centuries, such as this one, are the best baskets of the Southwestern tribes, and they are treasured by museums and collectors. The Western Apache are not a single tribe but consist of five separate and completely independent tribes—the Cibecue, San Carlos, White Mountain, and Northern and Southern Tonto. They are now considered collectively as Western Apache.

It is rare to find a basketry bowl of this quality and condition still available on the market. It was fortunately well taken care of. It appears to be circa 1900. Such baskets are no longer being made by the Western Apache tribes as the work in harvesting the materials, preparing those materials for use, and weaving such a basket was too much work for the amount buyers were willing to pay.

Provenance: this Western Apache Very Large Basket Bowl with Diamond Pattern is from a private collection