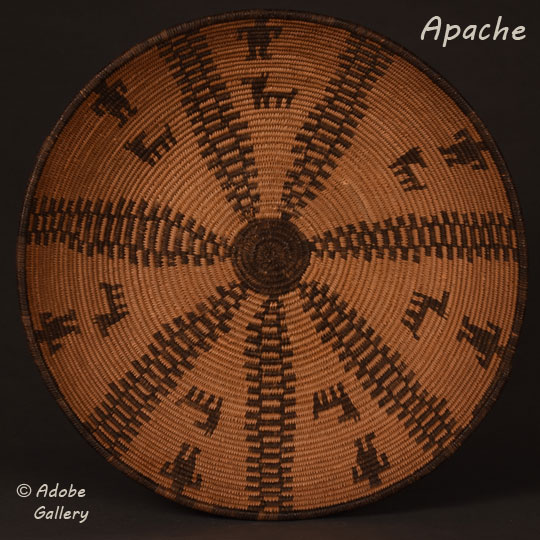 This Western Apache basketry bowl is visually interesting. Such exquisite baskets are no longer being made by the Apache women as they were unable, after the 1920s, to sell them for enough to compensate them for their labor. It is now a lost art. It is of single-rod construction with alternating black and golden yellow colors. The yellow is mulberry, and the black is devil's claw.

There are seven male figures and seven animals, the animals we have decided are canines. Each of the human and animal symbols are presented as pairs and separated by ladder-type elements that climb the wall from the black circle at the bottom. The designs appear on the interior and exterior as would be expected.

Western Apache basketry of the late nineteenth and early twentieth centuries is the best basketry of the Southwestern tribes and they are treasured by museums and collectors. The Western Apache were not a single tribe but consisted of five separate and completely independent tribes-the Cibecue, San Carlos, White Mountain, and Northern and Southern Tonto. They are now considered collectively as Western Apache.

The process of basket weaving was coiling the weft material (visible) over the heavier rod foundation (concealed) or warp of the basket. Designs were created to the likeness of the maker or, more likely, to the limit of the maker's talent and allotted time.

Willow was the most common material used for the warp or foundation. Devil's claw was favored for the black decoration and Mulberry was a favored material for the weft or the visible stitch material. These materials had to be collected at the appropriate season, dried, or processed at the appropriate time, and then the basket construction could begin. The whole process was time consuming and laborious so it is no surprise that the women quit making them when they could not sell them for more than two dollars or so.

It is rare to find a basketry bowl of this quality and condition still available on the market. It was fortunately well taken care of. It appears to be circa 1910-1920.

Provenance: this Western Apache Basket with Men and Dogs is from a client of Adobe Gallery