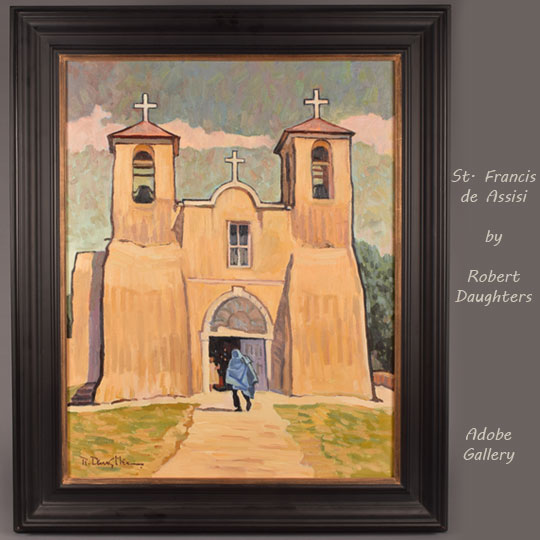 This incredible original oil painting, titled St. Francis de Assisi, was created by Robert Daughters.  The Spanish Colonial church depicted here is located in the center of the plaza in Ranchos de Taos, New Mexico. It was built between 1772 and 1816, and it has long been a favorite subject for artists working in Northern New Mexico.  Artworks like this, which feature specific subjects painted by many other artists, present opportunities to see through artists’ eyes.  We can compare Daughters’ St. Francis de Assisi to those which were painted by many other artists and, in doing so, begin to understand how he saw the world around him.  With a less-skilled artist, a frequently depicted subject might be boring.  With a unique talent like Daughters, that same subject can be illuminating and unforgettable.

Robert Daughters’ St. Francis de Assisi places the viewer directly in front of the beautiful adobe structure, staring directly down a path to its front door.  A man, wearing a blue blanket, walks toward the door, where a woman awaits his arrival.  The scene as a whole feels warm, bright, and appealing, and the addition of this small human interaction effectively elevates that feeling.   The church itself is absolutely incredible, thanks to the artist’s gorgeous color palette and singular compositional style.  The viewer might feel as if they are being drawn into the image, and it’s not just because of the inclusion of a man heading into an open door.  The painting has an alluring warmth that is undeniable. St. Francis de Assisi is a phenomenal piece from a truly remarkable talent.

The painting is signed R. Daughters in lower left.  It is framed in a wide, carved black frame with a gold interior band.

Robert Daughters (1929-2013) was raised in St. Joseph, Missouri. After graduation from high school and three years in the military, he worked as a Curator of Display at the St. Joseph Museum of Natural History while attending the Kansas City Art Institute and School of Design.  During a 1953 visit to Taos New Mexico, Daughters discovered the beauty of the Southwest. He and his family made their move to Santa Fe in 1970, then to Taos in 1972.  Rather than describe himself as an impressionist or expressionist, Daughters says he is a "composist"—his term for an artist who creates paintings with color harmony, the contrast of light and dark values and, above all, structure. His work is created from photographs, charcoal sketches and small plein air oil studies. The emphasis is on structure, an orderly arrangement of shapes, tones and atmospheric effect.  Daughters received many well-deserved awards and accolades during his career. Today, he is regarded as a significant and influential figure in the world of Southwestern art. ARTISTS OF SANTA FE Their Works and Words [SOLD]
by

SERENADING THE LIGHT [SOLD]
by