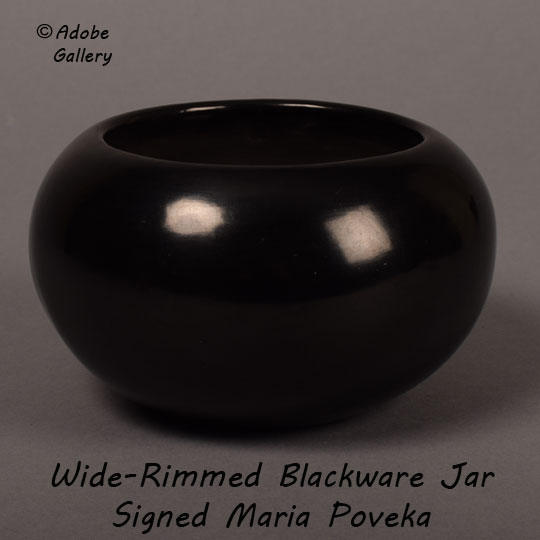 This stone polished blackware jar was created by San Ildefonso Pueblo artist Maria Martinez. The signature Maria Poveka on an undecorated blackware piece like this, according to Richard Spivey, was a signature started in 1956 and abandoned in the mid-1960s, so it lasted only a decade. However, in 1959, Popovi Da started adding a date to the pottery signatures, even those signed Maria Poveka. That fact would shorten the period of undated Maria Poveka pottery to 1956-1959.

This is a beautiful example of Maria's unpainted work. It's a low, open form with a wide rim. The skill with which it was executed is evident in its sophisticated look. Its walls curve gracefully out and then back in, and its perfectly polished slip covers the exterior, the rim, and about a quarter inch into the interior. When spending time with this piece, it is easy to see why unpainted Maria pieces remain especially popular with today's collectors. San Ildefonso Pueblo artist Maria Martinez (1887-1980) Poveka is probably the most famous of all pueblo potters. She and her husband Julian discovered in 1918 how to produce the now-famous black-on-black pottery, and they spent the remainder of their careers perfecting and producing it for museums and collectors worldwide. Maria collaborated with a number of family members over the years and also made unpainted pieces on her own. She is one of the most influential and historically significant Native artists. Her works are included in major museum collections around the world, and she is frequently cited as one of the most influential Native American artists.

Provenance: this Wide-Rimmed Blackware Jar Signed Maria Poveka is from the collection of Bob & Louise Sluder, Dealers/Collectors active from 1955 to 1990