Winter in the Hills, an Original Painting by Carl Redin [SOLD] 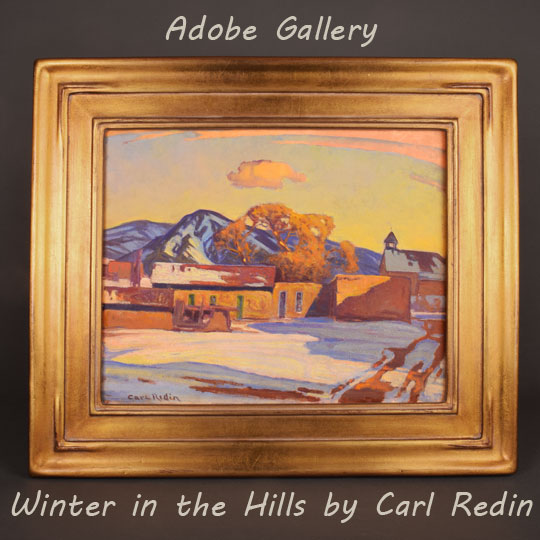 Carl Redin fell in love with the vibrant New Mexico landscape and began to paint southwestern scenes.  The subject matter he chose and his amazing talent make his paintings highly desirable and collectible.

Swedish artist Carl Redin, who lived and worked in New Mexico for many years, died at just 52 years of age. Fortunately, Redin left behind a large body of work, including this exceptional oil painting.  It’s a distinctly Southwestern scene: purple mountains, rising sharply behind a row of adobe buildings and a church. In the center of the image, between the buildings and the mountains, is a large cottonwood tree.  The top third of the image is a mostly clear sky, and the bottom third is snow-covered desert land. A quick glance at the painting’s elegant composition is not enough, though; a closer look reveals outstanding work with a vivid color palette.  The ground—white and brown, snow and dirt, essentially, in the hands of a lesser artist—comes alive with the addition of pink and yellow hues. Blues and purples fill out the areas that are bathed in the shadows of the clouds. The sky is exquisite—light blue, with a burst of yellow surrounding the mountaintops, expansive despite the painting’s reasonable size—without feeling exaggerated in any way.  A round cloud with rippling purple edges floats in the center of the sky, while another formation slopes gently across the top right corner.

The feeling that arrives in the wake of a winter snowstorm—when the clouds part and the sun reemerges—is captured in spirit by this painting.  The image feels warm and dreamy; it’s inviting and appealing despite the visible signs of winter. Redin’s representations of Southwestern architecture and landscapes are always faithful, accurate and technically accomplished; it’s the subtle but very expressive touches that set images like this apart.  Here, it’s the aforementioned use of quiet lines of bright colors contrasting with cool, dark shadows. This excellent painting is at once uniquely expressive and accurately representative. Redin’s work here is alive with the energy of the supernatural Southwest.

“Carl Redin was born in Sweden in 1892. As a youngster, he was fascinated with the American west. His talent was recognized at a young age and he was afforded the opportunity to study art for a short period of time in Stockholm when he was 14. He was drafted into the Swedish Navy and when he had 3 years left to serve, he immigrated to the US and settled in Chicago. In 1916, he was diagnosed with tuberculosis and, like many others of the time period, decided to “take the cure” at Albuquerque’s Methodist Deaconess Sanitorium.  While recovering in Albuquerque, he fell in love with the vibrant New Mexico landscape and began to paint southwestern scenes. He was part of Albuquerque’s first community of artists that included Ben Turner, Nils Hogner and Carl Von Hassler. Of all of these artists, Redin was the only one who has had a one-man show at the Albuquerque Museum. The Museum featured his work in a show from September 1984 until January 1985. Redin remained in Albuquerque, painting the Sandia Mountains, the volcanoes and New Mexican scenes for most of his life. A heart condition forced him to leave New Mexico in 1940. He moved to California and died 4 years later. To quote an article from the Christian Science Monitor written in 1926: ‘Redin’s work has always a happy mood. Whether in the vivid colors of Jemez Canyon or A Mountain Village, he seems to pick with unerring instinct the moods that only an artist could find. Mountains, trees, seasons, adobe houses, Indians—all these are truly a part of the New Mexican life, and these he paints.’” — Biographical Information taken from Catalog of Carl Redin show. Albuquerque Museum, 1984

The painting is signed Carl Redin in lower left, and framed within a tasteful gold frame.  Redin was known to make his own frames.  This is the original frame, restored to its current condition.

Condition:  Winter in the Hills, an Original Painting by Carl Redin is in very good condition

A Boy's Albuquerque
by Kenneth Balcomb