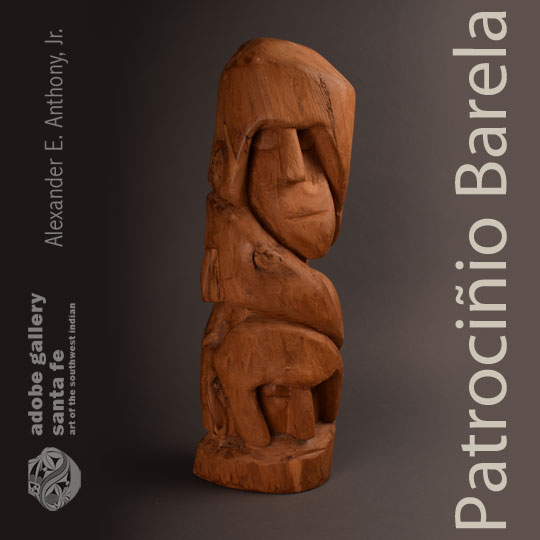 This wood carving by Taos-dwelling Hispanic artist Patrociñio Barela is titled “Inner Ear”.  Barela carved five faces into this large block of wood. Each one has slightly bulging eyes, a slit for a mouth, and a large nose which hangs down into the carved face area.  The two faces at the top of the piece—one on each side, facing away from each other—are the most defined. Five parallel lines create what appears to be a hand above one of these heads. A semicircle extends from the side of the other head—perhaps this unusual detail is the entrance to the titular “Inner ear”?

At nearly two feet in height, this is a substantial piece with a very strong presence.  The arrangement of the faces is beneficial, too—they circle the piece and are visible from all directions, giving the viewer a lot to look at and opening the piece up to a wide variety of display options.  Barela’s works are immensely charming, and a recent exhibition at a reputable Santa Fe gallery has brought the artist much-deserved recognition from a new audience. Adobe Gallery is pleased to offer this large, beautiful carving to our collectors.

The bottom of the carving is signed “Pat Bar”.  Two books are included with the carving: Patroncinio Barela: Taos Wood Carver by Crews, Anderson and Crews; and Spirit Ascendent: The Art and Life of Patroncino Barela by Gonzales and Witt.

Patrociñio Barela (ca.1904-1964)—or “Patrocino Barela”, according to certain sources—was a self-taught wood carver. Because of the religious nature of his subjects he was called a santero, but he did secular work too. His work was shown at the Museum of Modern Art in New York with other artists of the Federal Art Project; he was feted as "a discovery."  He was the first Mexican American artist to receive national recognition. While the exact year is unknown, Barela was born in the early 1900s. His mother died early in his life. According to one version of his story, he was at some point found wandering around Denver. Barela did not attend school for more than a few weeks and was not able to write. He worked as a steelworker, miner, railway worker and as a farmhand.  In 1930 he married a widow with four children. Eventually, they had three more, giving them seven in total.

Barela found his calling as a carver of sacred objects in 1931. He repaired a figure of St. Antonio, a job for which he was promised five dollars. Although the five dollars never appeared, Barela realized that his work had value, and he continued to make figures.  He was taken on by the Works Progress Administration and eventually the Public Works of Art Project. Because he was illiterate, he was given a sheet filled with squares to which he would add a cross every day to record his work. This was in 1935. Eventually, his work was exhibited at the Museum of Modern Art, but he had no ambition to see the eight objects chosen as part of a Federal Arts Project exhibition there. He was lauded by the museum as "the most dramatic discovery" and he was called "discovery of the year" by Time magazine.  The largest collection of his work is at the Harwood Museum of Art in Taos—part of the University of New Mexico. His legacy is carried on by many of his descendants.  Barela died in a house fire in 1964.

Provenance: from a Colorado collector

Recommended Reading: Spirit Ascendant - The Art and Life of Patrocino Barela by Edward Gonzales and David L. Witt.  A copy of this book is included with this sculpture.