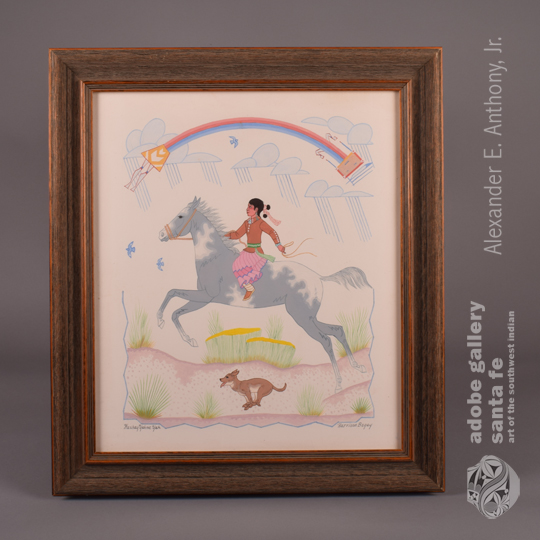 In 2012, the Smithsonian Museum featured an exhibit called “A Song for the Horse Nation: Horses in Native American Cultures.” The introduction to the exhibit, which is available on the museum’s webpage, states:

“The story of the relationship of Native peoples and horses is one of the great sagas of human contact with the animal world. Native peoples have traditionally regarded the animals in our lives as fellow creatures with which a common destiny is shared. When American Indians encountered horses—which some tribes call the Horse Nation—they found an ally, inspiring and useful in times of peace, and intrepid in times of war. Horses transformed Native life and became a central part of many tribal cultures.

By the 1800s, American Indian horsemanship was legendary, and the survival of many Native peoples, especially on the Great Plains, depended on horses. Native peoples paid homage to horses by incorporating them into their cultural and spiritual lives, and by creating art that honored the bravery and grace of the horse.

The glory days of the horse culture were brilliant but brief, lasting just over a century. The bond between American Indians and the Horse Nation, however, has remained strong through the generations.”

In the exhibit, the Diné legend of the creation of the horse by the Holy Ones is featured in the section titled “Blessing for the People: Native Stories of Horse Origins.” It goes as follows:

Turquoise Boy then undertook a quest to find a means of travel for the Diné. After several false starts, he finally visited a mesa in the Dinetah, the original Diné homeland, where he found a fat man and his family living in a hole in the ground. The fat man turned out to be Mirage Man, who gave Turquoise Boy the bead, pollen, and horse saliva fetishes needed to produce horses.”

This untitled watercolor painting by Harrison Begay (1917-2012) pays homage to an animal that is, as illustrated above, of considerable significance to the Diné: the horse. Here, Begay’s horse is front and center, leaping off the ground and across the dry plains of the Navajo reservation.  In the foreground, a small dog leaps too, its legs crossing inward rather than extending outward like the horse’s. Above the animals are birds, rain clouds and a Rainbow Guardian figure. Riding the horse is a young Diné girl, dressed in the brightly colored traditional clothing that collectors expect to see in Begay’s paintings. The painting is signed “Haskay Yahne Yah” in lower left, and “Harrison Begay” in lower right.

Harrison Begay (1917-2012) was a world-renowned Diné (Navajo) painter who is generally regarded as one of the most successful and influential early Native American painters. Begay studied under Dorothy Dunn at the Santa Fe Indian School in the 1930s, and then attended colleges in North Carolina and Arizona.  From 1942 to 1945, he served in the US Army Signal Corps. In 1947, Begay returned to the Navajo reservation, where he enjoyed a long and productive career as a painter. He is known to have continued painting into his 90s. Begay passed away in 2012.

Condition: this painting of a Young Diné Girl Riding Horse with Dog Running Beside is in excellent condition