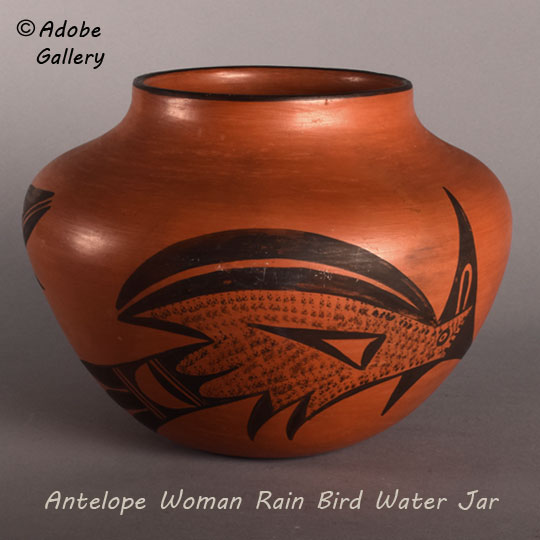 Hopi Pueblo potter Zella Cheeda, or Antelope Woman, created a unique version of the classic olla in this contemporary jar.  Its shape suggests water collection, and yet it has obviously been made for the market as it lacks the size and tell-tale balance indentation on the bottom.  Another marker of its era—this jar is practically flawless.  With its Sikyátki pattern borrowed from the early years of design and chunky, black on red coloring, it blends the past elegantly with the new.  A black rim frames the design content, an abstract rain bird flying amongst the clouds.  The rain bird glides mythically through the sky, sweeping across half of the surface of the jar itself.

Zella Cheeda (1901-1997) was known as Antelope Woman or Antelope Girl and signed her pottery with the image of an antelope.  She was Hopi from the First Mesa village of Sichomovi and was an active potter from 1950 to 1980.  She was particularly well known for her redware Hopi pottery such as this jar.  She is represented in the Museum of Northern Arizona and the National Museum of the American Indian collections.

Provenance:  this Antelope Woman Black on Red Rain Bird Water Jar is from the estate of Henry Christensen III, former attorney at law of New York City, who purchased it from Adobe Gallery in 1998