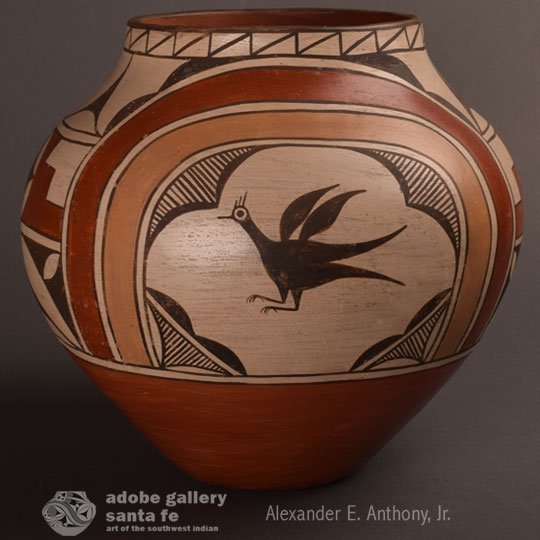 This Zia Pueblo pottery jar (Tinaja) by Sofia Medina features a pair of rainbows hovering over a bird in traditional Zia Pueblo style.  However, the difference is the potter chose to paint the two rainbows in different colors rather than the same color. It is a striking change to the routine.  Above the top rainbow hover dark brown clouds. Surrounding the birds are parallel lines representing rain and some dark brown clouds. The bird and rainbows are repeated on opposite sides of the jar. The designs obviously refer to water—typical of water jar decorations. Separating the bird designs are elements consisting of triple horizontal stacked rectangular bands.  The lower, or foundation band, contains a large triangular shape with curved walls which perhaps represents a cloud.  Stacked on that layer is one containing a polished orange slip stepped element containing in its center a pair of back-to-back brown triangles with curved edges.  The top layer of these three stacked arrangements contains a pair of brown triangles with similar curved edges. This design is featured on opposite sides of the jar.

The area below the design occupies about a third of the surface and is red stone-polished slip.  It is on the red section that Sofia routinely signed her pottery. Her name is just below the double framing lines and at the end of a rainbow.  Around the rim are rectangles divided diagonally, all executed in brown pigment.

Sofia Pino Medina (1932 - 2010) married into the Medina family in 1948. She and her new husband, Rafael (1929-1998), lived with his grandmother, Trinidad Medina, who taught Sofia the techniques of potting. Her mentor, Trinidad, was one of the most talented potters at Zia Pueblo and Sofia learned well and produced quality wares throughout her life. Sofia used all natural materials in her pottery, including the pigments for painting. Her husband is known for using acrylic paints on pottery after firing. Sofia used tan slip on her pottery jars and stone-polished it to a beautiful silky sheen. The designs were executed in soft rose-red slip and brown mineral paint.