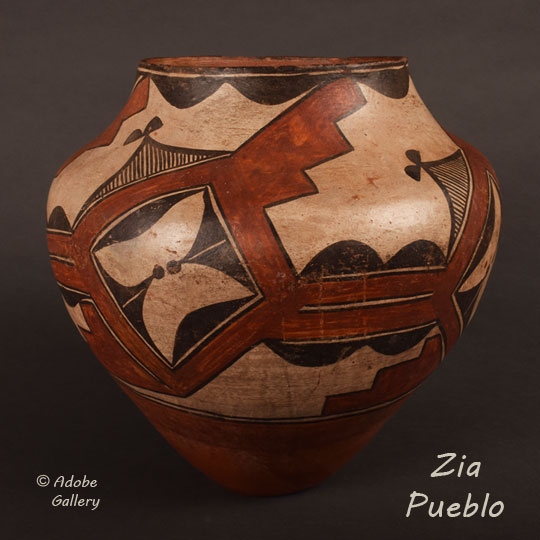 This historic polychrome pottery OLLA, or water jar, was made by an unknown Zia Pueblo artist. Judging by the look and feel of the OLLA, we would estimate that it dates to around 1900. It shows evidence of pueblo use, most notably in the form of a pattern of small rim chips but also in the light abrasions that appear around the OLLA's widest point. The OLLA has acquired a beautiful patina in the many years that have passed since its creation.

The designs were completed using black and red pigments over a cream slip. The primary element is a diamond-shaped form, within which traditional Zia designs are set and from which additional elements emerge. Kiva step patterns emerge from its upper and lower corners. Horizontal bands travel from its right and left corners, ultimately meeting the next instance of the design to form a pattern that continues uninterrupted around the olla. Rain clouds circle the rim, and the typical red tone appears on the base.

The vessel shape is wonderful. It is a bit taller than the typical functional olla, so it has a somewhat dramatic look. It appears as though the potter achieved this by building out and up from a base that is smaller than usual. Her experiment was a success, and this piece has an impressive presence.

Condition: Light wear from handling and use. A few cracks that have been stabilized and concealed are visible under a blacklight

Provenance: this Zia Pueblo Historic Polychrome OLLA with Beautiful Patina is from a  private collection