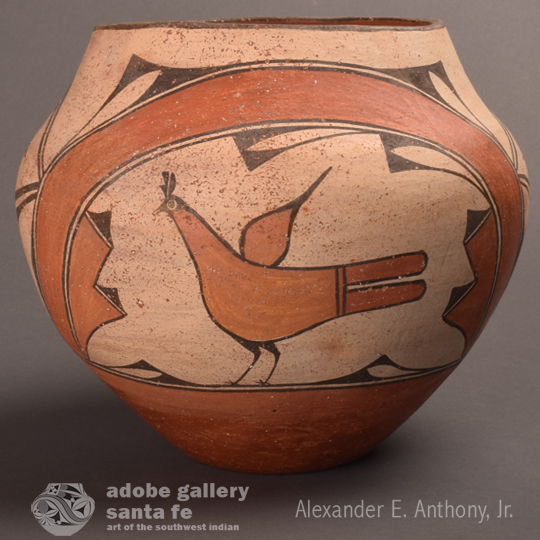 Realistic birds on Zia Pueblo pottery appeared around 1820 and their use has continued to today. They became much more in evidence by 1870.  The birds on this historic OLLA or water jar are typical of Zia birds of the early 20th century.

The birds each have a wing that point upward from the body that looks like a leaf.  The birds have short legs, red bodies outlined in black, split tail feathers and black heads.  The pupil is a small dot in a round eye and the beak is split as if the mouth is partially open.  The lobes on the head that appear to be ears represent feathers.  Each bird is situated underneath a protective rainbow.  There are four capped feathers in each bird’s house.  Both birds stand on the lower framing line.  There is a matte red band just below the design area and the remainder of the underbody is stone-polished red clay.  The base is concave.  The jar dates to the late historic period, probably circa 1910-1920.

Condition: this Historic Zia Pueblo Pottery OLLA with Birds and Rainbows appears to have some professional repairs to cracks.  There is some spalling of the cream slip.

Provenance: from the extensive collection of a Santa Fe resident who unfortunately moved to another city and found it necessary to greatly reduce her collection.