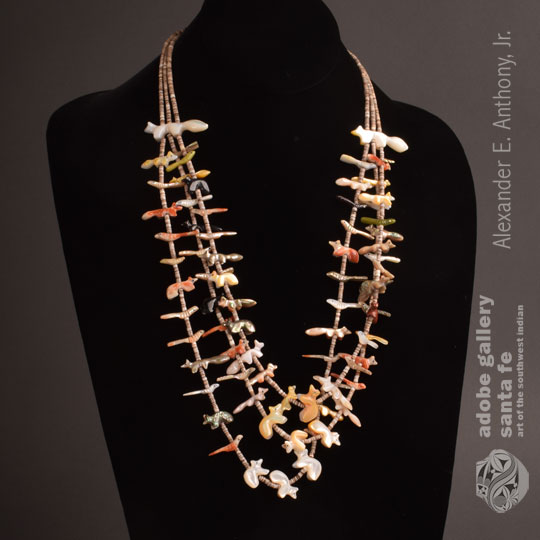 Zuni Pueblo fetishes are small carvings of animals made by very skilled lapidary artists. These carvings traditionally served a ceremonial purpose, with individual animals being associated with specific powers to assist the owner in hunting, healing, prosperity or other important matters. Recognized and studied by Frank H. Cushing in the late 19th Century, fetishes have held a fascination for non-natives for over 100 years.  Early on, traders realized the value of the carvings as an item to market to visitors to the Southwest. As an artform, they were made and sold with secular intentions, not ceremonial. Today the carving of fetishes has become a primary economic activity at Zuni Pueblo.

Zuni Pueblo artists began creating necklaces with multiple fetish carvings in the mid-20th Century. This three-strand necklace is from that time. The small animals are beautifully carved in spondylus shell, mother of pearl, jet, serpentine, and pipestone. Animals include birds, bears, and foxes. At the top of each side a larger bushy tail fox holds together the three strands. The approximately 75 fetishes are perfectly carved. Each of the various colored animals has delicately placed eyes. They are set between finely made Santo Domingo hieshe with silver cones on the ends.

Condition: The necklace is in excellent condition.

Provenance: this Zuni Pueblo 3 Strand - 75 Fetishes Necklace is from a resident of California whose mother it belonged to. A Guide to Zuni Fetishes & Carvings, Volume II: The Materials and the Carvers [SOLD]
by Kent McManis

A Guide to Zuni Fetishes & Carvings, Volume I: The Animals and the Carvers [SOLD]
by Kent McManis