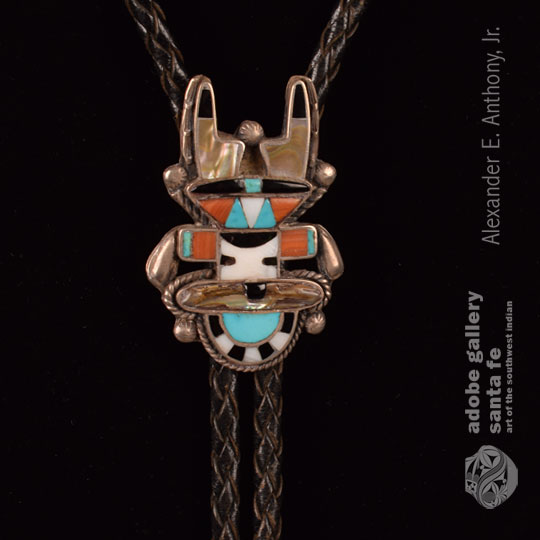 It is well established that Zuni Pueblo lapidary artisans are amazingly creative in making pictotrial jewelry in mosaic style.  This bola features the head of an antelope or possibly a deer. The antlers were made from mother of pearl and tipped with jet.  The animal’s face was made from white shell and jet, ears of spondylus shell, and crown of white shell, turquoise and spondylus shell in triangular cuts. The mother of pearl neck ruff is in raised form, a trait started years ago by Zuni jeweler Leo Poblano.  This is an incredible image that was beautifully and expertly created in the 1940s.

Provenance: this Zuni Pueblo Bolo Tie of Antelope or Deer Imagery was purchased by a former medical doctor in Santa Fe who not only purchased outstanding examples of jewelry for his wife, but apparently purchased some for himself.  He passed away a number of years ago and his wife just passed away, so this is from their estate.