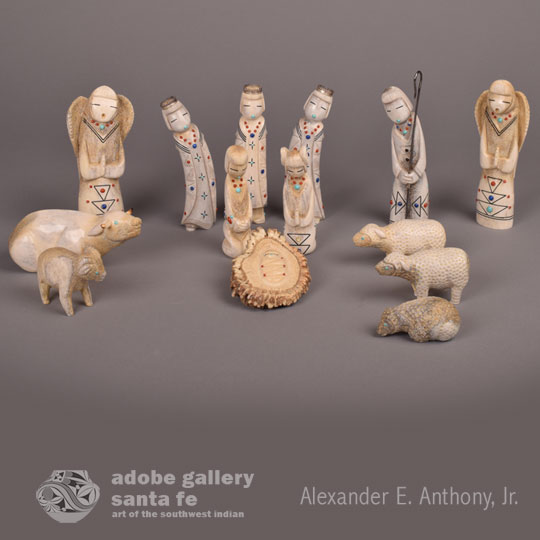 This is a most unique nacimiento, made by Zuni Pueblo artist, Troy Sice.  The figures were carved from antler and exquisitely inlaid with turquoise, jet and coral. There is the three-piece Holy Family, three Kings, two angels, a shepherd, and five animals.

Mary and Joseph are kneeling with their heads lowered.  Each wears a necklace of coral and turquoise cabs. Joseph has a turquoise inset mouth and Mary one of coral.  Their eyes are made of jet. Joseph wears a concho belt made of jet with insets of semi precious stones. He has coral and turquoise inset on his right arm.  Mary wears a cape with inset jet triangles on the front and down the back, each with a semi precious gemstone. Her hair is set in the Hopi unmarried girl’s whorl, each with an inset gemstone.  Baby Jesus and cradleboard are a one-piece carving. The infant is decorated with jet, turquoise and coral.

Each of the three kings is adorned with elaborate carved capes, each wears a gemstone necklace and each has turquoise and jet crosses down his front.  On the back of their cape, each has a multi-stone inlay sun face in the Zia Pueblo style. There are jet dragonflies on their capes. Each king wears a silver crown, has jet eyes and a turquoise mouth.

The two angels are similar in design, yet slightly different in posture.  Each has his or her hands pressed together, each wears a necklace of turquoise and coral, and their skirts are similarly designed with jet-inlay triangles and  gemstones. The back of each angel has a beautifully detailed carved pair of wings.

The shepherd is similarly decorated to the other figures.  He carries a metal staff and has his head slightly tilted to the right. His back is decorated with an incised feather, jet inset black triangles and gemstones.  His two sheep are similar, each with turquoise eyes and body that represent uncut wool. One of the sheep has his right rear leg pulled up to his body but he stands well on three legs.

There is an ox or steer lying down who has fossilized ivory horns and turquoise eyes.  There is a ram or mountain sheep with carved horns and open mouth. There is a small sheep lying down with its legs tucked underneath its body.  His mouth is open and his eyes are turquoise.

Troy Sice won top honors at the 2019 Santa Fe Indian Market by winning Best of Classification award for sculptures.  He is a third-generation carver of traditional fetishes. He embellishes his antler carvings with inset gemstones and carved designs.  His nacimiento sets are timeless jewels.

Provenance: from a nacimiento collector in North Carolina