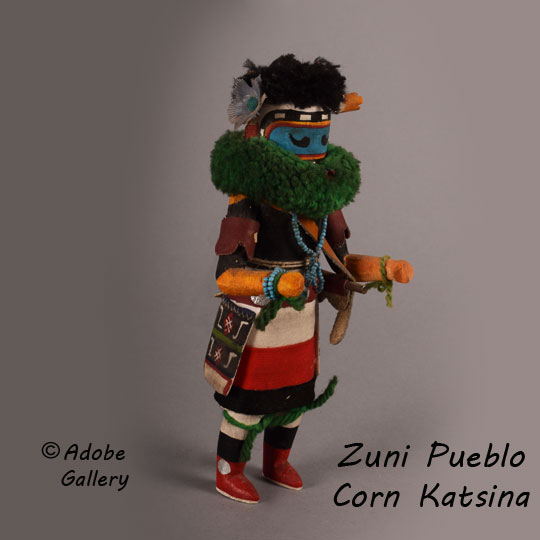 This Corn Katsina was made at Zuni Pueblo around 1960. As is usually the case, we cannot identify the artist, only their pueblo of origin and the being depicted in the carving. This particular katsina is of great significance at Zuni and most other pueblos, which explains why he is depicted here with such care and detail. This cottonwood carving was painted beautifully in colors that are both appealing and accurate. Leather, beads, string, plastic, fabrics, and even metal appear on this piece, forming thoughtful representations of dance regalia and paraphernalia.

"The Nawish (or Corn) Dance is a widespread ceremonial with representations in virtually every pueblo. In Zuni it is the Nahalisho Dance. This performance was introduced into Zuni from Laguna (Pueblo) sometime around 1904 by a man belonging to the Upts'ana Kiva who had seen it given at the neighboring pueblo. At that time, and for some time afterward, the dance was considered to be the property of the Upts'ana Kiva, but today it can be given by anyone, usually in the Winter Series. Several of the personages who appear in the dance seem to have been added through the years and at present are subject to change. The Corn Dancer himself varies in appearance but is recognizable by the consistent use of a headdress of four turkey wing feathers set at right angles." [Wright, 1985:121]

The feathers have previously been removed in accordance with Federal regulations.

Provenance: this Zuni Pueblo Nahalisho Ko'ko, Corn Katsina Doll c.1960 is from the collection of a client from Texas