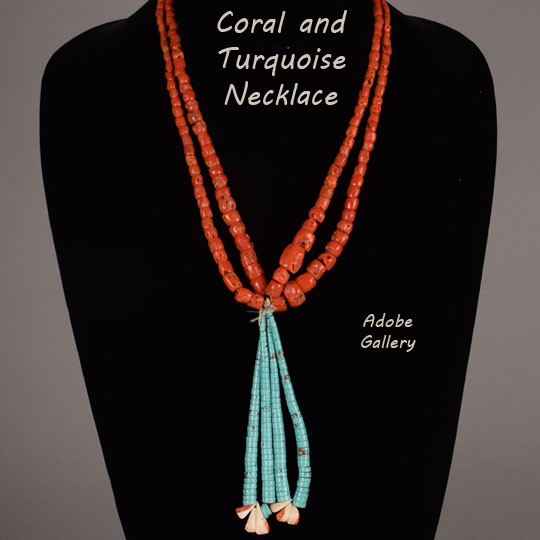 This red coral and turquoise jacla necklace is very original.  Left in a wonderfully raw form, the red coral beads have been crafted and strung in increasing size from the ties of the necklace.  Red coral is difficult to procure and has always been considered a sign of wealth for the tribes of the Southwest.  Often highly processed, these beads stand in their original glory— rough at the edges and only shaped to form beads but otherwise, untouched.  It gives the necklace a special feel, and one may feel both at ease and very much decorated while wearing it.

The jacla features outstanding turquoise beads, also increasing in size toward the base and each is finished with three raw pieces of white and red coral.

Jacla are composed of two loops of turquoise and shell strung individually and then tied together in a fashion by which they can be hung from a nugget necklace.  Originally, in the 19th century, each of the units was made for use as earrings.  When not being worn, they were hung on a nugget necklace for storage.  Eventually, their use as earrings ceased and their use as a pendant on a necklace became permanent.

Although unsigned, this necklace is like some made by Leekya Deyuse.  In a recent publication, four necklaces fashioned in a very similar way to this one were attributed to this famous artist, based on purchases made at the Trading Post at Tse Bonito, NM, in 1955.  We cannot, however, use this reference to make such an attribution to this necklace.

The turquoise beads are a saturated, robin’s egg blue and several pieces feature coppery deposits.  It is likely each piece was procured from the same mine in the American Southwest.  This necklace has both masculine and feminine qualities.  It is raw and perfect in many ways, allowing the precious components to shine.  Beads descending in size and lovely proportions of bright red, blue, and white permit this necklace to be balanced while still making a statement.  It is suitable for any occasion the wearer would like to imbue these desirable elements.

Condition: this red coral and turquoise necklace is in excellent, if not original condition.

Provenance: this Zuni Double Strand Red Coral and Turquoise Necklace with Jacla  is from a private collection Treasures of the Zuni (Treasures) (SOLD)
by Theda Bassman