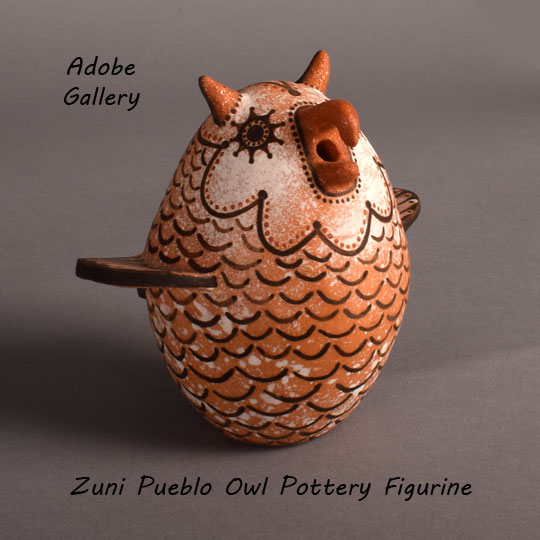 This Zuni Pueblo seated owl pottery figurine is very typical of the style made in the late 1800s and early 1900s, however it is one made in 1999 by Milford & Josephine Nahohai.  It is covered from head to base with feathers.  The eyes are unusual as they appear as snowflakes. A white slip was applied to the whole figure, then, it appears, it was partially wiped off in areas.  Having never seen such, I am at a loss to explain what happened.  The ears and beak were covered in micaceous clay.

Since the mid-1800s, Zuni Pueblo potters have been making effigy vessels and figurines. Owl figurines have always been a favorite. In 1879, Alexander Stevenson collected, for the Smithsonian, figurines, including an owl.  The earliest figurines were made in such a manner that the owl stood on its feet. Later, potters eliminated the feet and had the owls sitting on their legs.

Milford Nahohai is the son of Josephine Nahohai.  They sometimes collaborated on pottery production.

This owl is an especially nice one that was beautifully modeled. The painting of the features and feathers is excellent.

Provenance: this Zuni Pueblo Owl Pottery Figurine by Milford and Josephine Nahohai is  from the estate of Henry Christensen III, attorney at law in New York City, which he purchased from the artists at Santa Fe Indian Market in 1999.

Recommended Reading: The Pottery of Zuni Pueblo by Lanmon & Harlow