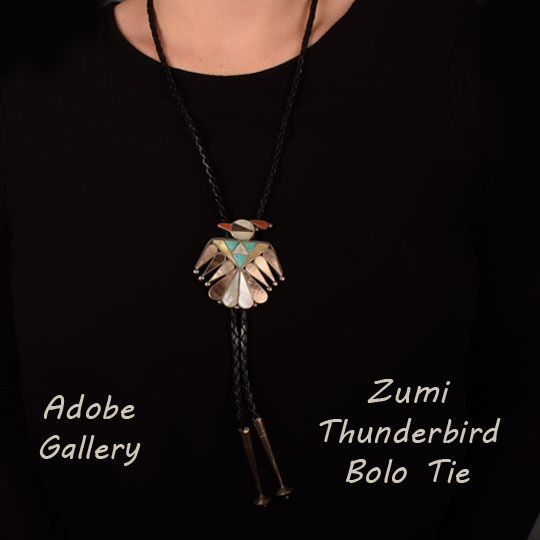 There is little more powerful than a thunderbird in Native American mythology.  The thunderbird represents strength, might, and protection.  Furthermore, thunderbird spirit brought the storms and rain— a most critical aspect for life itself in the deserts of the American Southwest. True to its namesake, this thunderbird bolo is magnificent, powerful, and mythical.

The artist of this bolo possessed much talent, as the design and inlay work are extraordinary.  The thunderbird’s wingspan is said to be enormous, and this bolo is fashioned in this manner.

Wing feathers in sets of three expand out of a broad chest and are inlaid with gorgeous, darker pieces of shimmering pearl. Each wing feather has a silver ball at its tip, perhaps referring to the lightning snakes the thunderbird possesses under his wings.  Four large tail feathers fan out powerfully below, with the central two being a lighter, more pearlescent color than the two edge feathers.  Silver balls reside beneath these too, continuously with the wings.

A proud triangular chest ties the piece together and features pearl and turquoise triangles fit together in mosaic fashion. The turquoise are each a saturated green blue and frame a positively glowing rainbow centerpiece of pearl.  The chest and wings are topped with textured twisted silver.  Atop the chest a regal head looks to one side and features red coral for a beak and head feather.  A round face is split into three with an imposing darker piece used for the eyes.  Lastly, two more silver balls lift the head feathers like emitted lightning.  The bolo is made with braided leather and finished with two long silver beads.

Condition: This thunderbird bolo is in excellent condition.

Provenance: This Zuni Pearl, Turquoise, Silver and Red Coral Thunderbird Bolo is from an estate in eastern Washington.

BOLA TIE New Symbol of the West [SOLD]
by