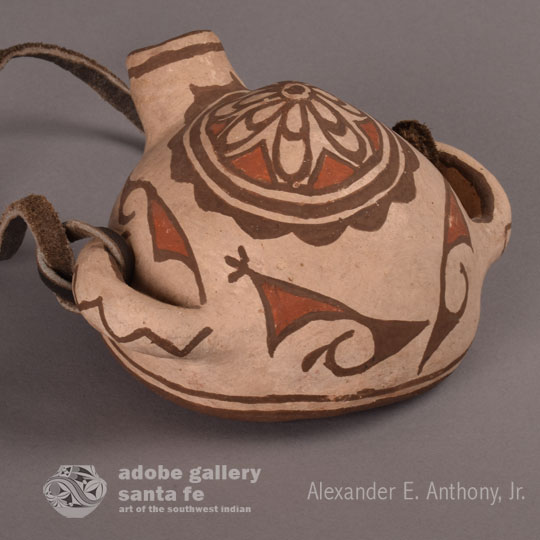 The primary design on this canteen is a rosette, located on top center of the body.  This rosette is the same design used on most Zuni Pueblo polychrome pottery jars. Zuni potters told Ruth Bunzel in 1924 and 1925 that the designs were called ‘hepakinne’sunflower’ or painting on Salimopiya (katsina) mask.”  The other designs surrounding the medallion on this canteen are designs seen frequently on the neck of Zuni water jars.  The potter used designs with which she was familiar.

The base of the canteen is flat and painted black as are the bases of Zuni pottery jars.  The canteen sits on the flat base in such a manner that the spout is pointed upward to prevent liquid spilling out.  The canteen is not signed with the name of the potter.  It appears to be from the mid-20th century.

Pueblo pottery canteens were made different sizes depending on the intended use. Traditionally, small but functional canteens were made at the pueblos for the men to fill with water and take to the fields with them. Of course, collectors sought after them as well, so the women potters began making them to sell. Usually they were made even smaller than the functional ones.

Provenance: this Zuni Pueblo Small Polychrome Pottery Canteen with Rosette Design is from the estate of a long-time Santa Fe family

Recommended Reading: The Pottery of Zuni Pueblo by Harlow and Lanman