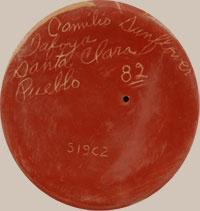 Camilio Sunflower Tafoya (1902-1995), Santa Clara Pueblo, was the son of Sara Fina and Geronimo Tafoya, and brother to Margaret Tafoya. He started making pottery in the mid-1920s and for years specialized in large carved blackware.