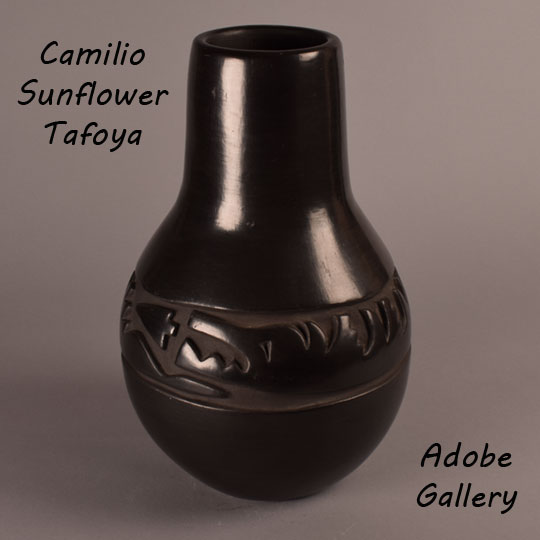 A strong shape, substantial body and rich color set this jar apart as the work of Camilio Tafoya. A long tubular neck gradually widens into an almost perfect globe. The vessel was fired to a consistent, rich black, and the mid band was deeply carved. The Avanyu is also more divergent than any other artist's representation. Camilio's version sports jagged upward shapes all throughout the body, indicative of the lightning associated with Avanyu serpents.

Camilio Tafoya made traditional black carved pottery in the mid-twentieth century, then later switched to smaller sgraffito style pottery. Camilio also made tall jars like this one, with a pre-drilled hole near the base, to accommodate converting the jar into an electric lamp. Converting pueblo pottery jars to lamp bases was popular in the 1950s and into the 1960s and 1970s.  Normally, cowhide shades were used for the lamps. The signature is faint but quite readable.

Camilio Sunflower Tafoya (1902-1995) was the youngest of the male children of Sara Fina and Geronimo Tafoya, thereby brother of Margaret Tafoya.  His main interest in his younger years was agriculture. It was not until his later years that he developed an interest in making pottery. His early works were traditional Tafoya family pottery styles—black carved wedding vases and tall-neck jars.  Later, working with his children—Grace Medicine Flower and Joseph Lonewolf—he became famous for delicate incised pottery, referred to as sgraffito. Blair 1986, 62

Provenance: Originally from the Lucille & Marshall Miller collection, now from the collection of a client from New Jersey.