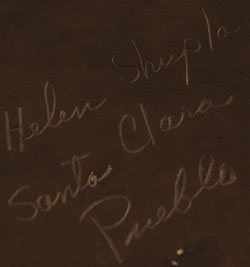 Santa Clara Pueblo artist Helen Shupla was best known for her magnificent melon jars, but she was making more traditional black-on-black pottery before she ventured into melon jars. If Helen Shupla left her mark, it was her masterful creation of these melon jars. The melon jar shape has existed since the beginning of the 20th century, but no one brought it to such prominence as did Shupla. She developed her own technique for pushing the melon ribs outward from the inside while she was building the jar with coils of clay. Most potters build the jar, then scrape away some of the clay to form the ribs.

Helen Baca Shupla was of Santa Clara Pueblo and Tohono O'odham (Papago) heritage and was born in 1928.  She was active as a potter from around the mid-1940s until her death in 1985.  Her husband, Kenneth Shupla, was a Hopi carver who moved to Santa Clara when he married. It is traditional for the husband to move to the wife's village.  Their daughter married Alton Komalestewa, also a Hopi.  He was mentored as a potter by Helen and began making melon jars of her style.