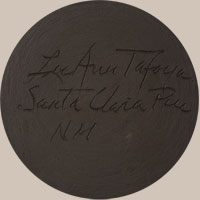 Santa Clara Pueblo artist LuAnn Tafoya is collectible based on her pottery workmanship and ancestry from a famous family of artists. Some families pass artistic talent to their children who then pass it down to their children. This is truly apparent in the Tafoya family of Santa Clara Pueblo. Sara Fina Tafoya was a masterful potter as was her daughter Margaret Tafoya and some of her siblings. Margaret, in turn, passed on this artistic gene to nine children and numerous grandchildren. LuAnn Tafoya (1938- ) is a daughter of Margaret Tafoya, certainly inherited the talent to produce beautifully sculpted jars with outrageously burnished surfaces. She has made jars almost three feet tall-a feat not easily accomplished.