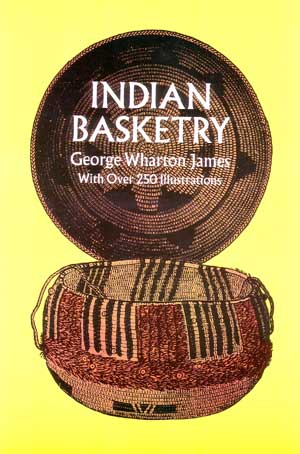 Since its first publication in 1901, this pioneering study by George Wharton James, once a leading collector and authority, has become a valuable source book for American Indian basketry. From Poma mush baskets to Paiute dicing trays, Indian Basketry traces the origin, development and fundamental principles of Indian basket design for the major tribal units in the Southwestern United States and Pacific Coast, with occasional comments on the basket weaving of a number of other North American tribes.

Author of several books on the Southwest, George James has used his extensive experience in the field to compile indispensable information (much gathered directly through interviews with Indian basketmakers) covering nearly every aspect of Indian basketry: esthetics, designs, dyes and coloration, weaving and stitching techniques (including the bamtush and dah-lah methods), basket types, tribal variations, and functional considerations, offering clear instructions for those who may be interested in reproducing these ancient American crafts. James also includes a description of various native weaving materials such as pine root, bark, sumac, willow, twigs, fern stalks, grass and palm fronds, with suggestions regarding the ways in which the Indians wove shells, feathers, beads, leather and pine needles into their basket designs.

Indian Basketry is a valuable aid for the artist, designer and craftsman, or even for the beginner, who may wish to recreate authentic and often extinct basket forms and decorative motifs. It is also most useful to the collector, cultural historian, ethnologist, scholar, or buff, who desires to know more about specific aspects of Indian basketry, or about Indian arts in general. As an important contribution to the historiography of American Indian culture, this may be one of the most practical Indian basketry books that you could own.
George Wharton James (1858 – 1923)