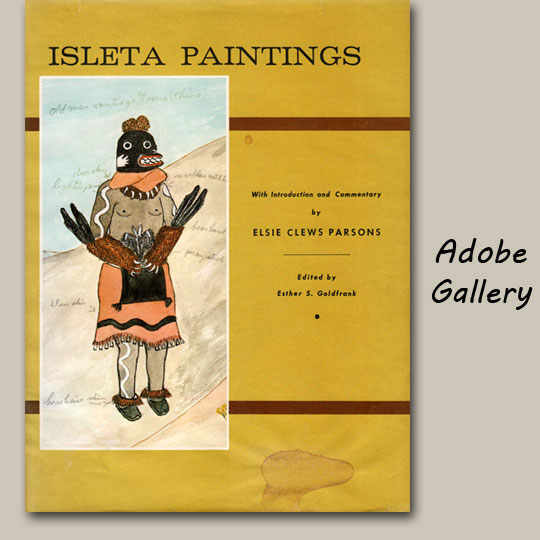 ISLETA PAINTINGS with Introduction and Commentary by Elsie Clews Parsons

For over two decades, and more than any other person, Elsie Clews Parsons influenced the course of ethnological research in the Pueblos of the Southwest.  She began her investigations in Zuni in 1915, and made visits to the “living” pueblos until shortly before her death in 1941.  She found Isleta to be non-responsive to her inquiries.

In early 1926, Parsons interviewed one man at Isleta Pueblo who was willing to talk, however members of the community made their meetings difficult, so they continued them in Albuquerque, 13 miles away.  Based on her interviews with this one man, Parsons published her “Isleta, New Mexico” as the 47th Annual Report of the Bureau of American Ethnology.

In 1936, an Isleta man saw the report and expressed his approval of the text, but criticized the lack of illustrations.  He said he could—for a price—remedy this deficiency.  Parsons agreed to his proposal, and, in 5 years, the artist painted well over 100 watercolors of extraordinary interest and beauty.

I have read the magazine printed by Washington in 1932.  The history is true and exact, but the pictures to complete it are missing.  I have drawn some of them.  These drawings you will never see anywhere because no one else could do them, it is too hard.  They are afraid to die if they do them.  I don’t want any soul to know as long as I live that I have drawn these pictures.  I want good satisfaction because they are valuable and worth it.  They [the subjects of the pictures] are most secret.  No one can see them but Indians who believe.  I have no way of making a living, no farm. . . If I had some way to get help in this world I would never have done this.  I expect to get good help.

He delivered 140 paintings to Parsons, and was well compensated.  His remarks penciled on them have been incorporated in the captions and commentary.  The name of the informant has never been revealed.

Condition:  Book is in very good condition with no evidence of having ever been read by the previous owner.  There is a water stain on the front of the slipcase.