Navaho Weaving: Its Technic and its History [SOLD] 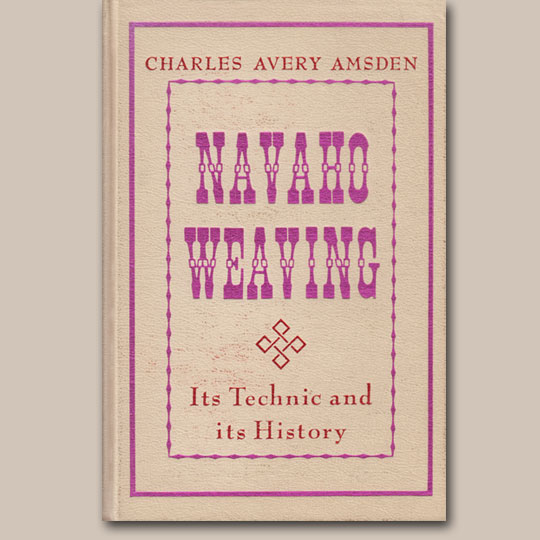 NAVAJO WEAVING Its Technic and its History by Charles Avery Amsden

in Cooperation with The Southwest Museum, 1934

Profusely illustrated with 12 figures, and 123 plates.

Detailed and comprehensive study of the techniques of primitive weaving, from the building of the loom with materials at hand to the cleaning, carding and handling the raw wool from the sheared sheep.  It is a remarkable accounting of a primitive people developing a most sophisticated skill.  At the time this book was first published in 1934, no non-Navajo Indian or Whiteman had ever developed the ability so beautifully displayed in this extraordinary art form.

So far as knowledge extends, the Navaho, earlier known as one of a number of Apache bands—the “Apaches de Navajo,”—adopted the art of weaving from captive Pueblo women probably about the middle of the eighteenth century, following the acquirement of sheep through raids on the flocks of the pastoral Pueblo Indians and Mexicans.  Substantial support of this is afforded by the fact that Pueblo women were early adopted into the Navaho tribe and assigned to specific clans; and it is known also that by the year 1780 they were officially reported as engaged in farming, raising herds, and weaving blankets and clothing of wool.

There have been numerous studies of primitive textiles, and several on Navaho weaving have been published, but until now the subject has usually been approached from the esthetic rather than from the technical point of view.  Born and reared on the selvage border of the Navajo tribal range, so to speak, it was not unnatural for a student of such exceptional acumen as Mr. Charles Amsden early to acquire an interest in these Indian neighbors, and especially in that phase of their culture which was so constantly displayed before his eyes.  Appreciating the need of a comprehensive study of Navaho weaving from other than its purely esthetic aspect, our author undertook his research into the technical side of the subject in 1929, and devoted all of his available time and energy to it during that and the following years. 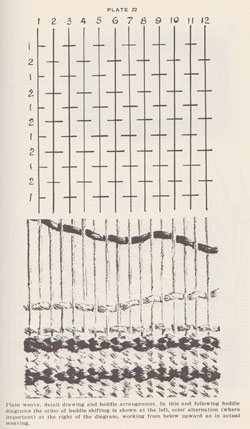 PART I – THE TECHNIC OF NAVAHO WEAVING

CHAPTER IV – Weaves of the Navaho