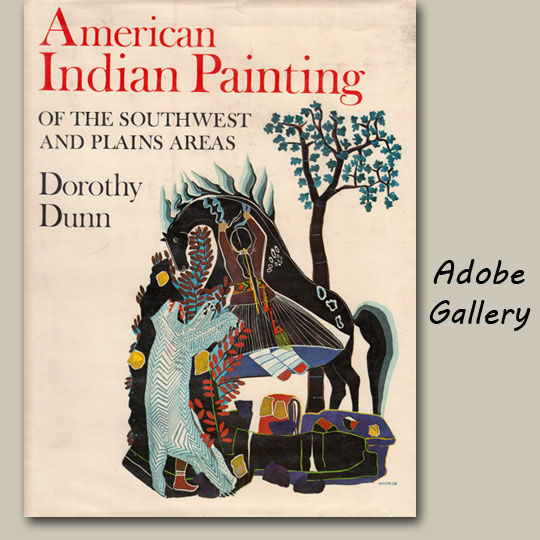 AMERICAN INDIAN PAINTING of the Southwest and Plains Areas

The University of New Mexico Press, 1968

Condition: near new condition with tears on slipcover

Long before the coming of Columbus, North America had produced an art of striking beauty and strength, expressing both action and thought in a highly symbolic and abstract style. American Indians, in the painting that was an unselfconscious part of their daily life, had developed to an advanced stage many of the characteristics considered modern in art. Yet this Indian painting, one of the truly fine arts of the world, remains little known in its own land.

Here Dorothy Dunn describes and interprets this painting as it evolved among the tribes of the Southwest and Great Plains. She traces the development of styles, motifs, techniques, and materials from prehistoric times down through the heydays of the Pueblos, Navajo, Apache, Sioux, Cheyenne, Arapaho, and Kiowa into the recent renaissance highlighted by the work of such artists as Andrew Tsihnahjinnie, Ha-SoDe, Fred Kabotie, Oscar Howe, Pablita Velarde, and Anthony Da.

The kinds of art Miss Dunn discusses include the pictographs which the Southwestern Indians drew on bark, bone, skin, and wood and the petroglyphs with which they turned whole canyon walls into galleries of heroic beings; the paintings that decorated Mimbres pottery; the murals with which the Pueblos covered the walls of their kivas; the sandpaintings that were and are a part of Navajo ceremonial dances; the records painted on buffalo hides by the Plains Indians to serve as robes and tipis or as calendars of personal and tribal history.

For the Southwestern Indians, painting was a natural part of all the arts and ceremonies through which they expressed their perception of the universe and their sense of identification with nature. It was wholly lacking in individualism, included no portraits, singled out no artists. But the roving life of the Plains Indians produced a more personal art. Their painted hides were records of an individual's exploits intended, not to supplicate or appease unearthly powers, but to gain prestige within the tribe and proclaim invincibility to an enemy. Plains painting served man-to-man relationships, Southwestern painting those of man to nature, man to God.

Such characteristics, and the ways they persist in contemporary Indian painting, are documented by the 157 examples Miss Dunn has chosen to illustrate her story. Thirty-three of these pictures, in full color, are here published for the first time.