Made in the Zuni Style: Zuni Pueblo and the Arts of the Southwest [SOLD] 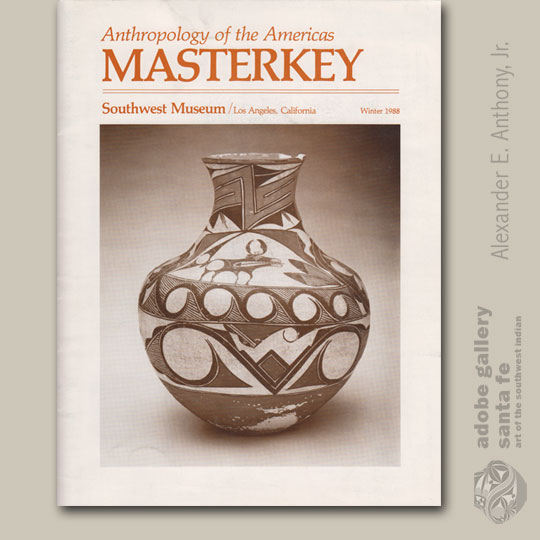 “Made in the Zuni Style: Zuni Pueblo and the Arts of the Southwest”

An article published in Anthropology of the Americas MASTERKEY

There are three major articles published in this edition, as follows:

- The Maynard Northwest Coast Photographs at the Southwest Museum

- Made in the Zuni Style: Zuni Pueblo and the Arts of the Southwest

- The Folk Art of Oaxaca, Mexico

- Synopsis of Made in the Zuni Style

This 9-page article is a comprehensive analysis of the influence of the art of Zuni Pueblo on other pueblo arts.  It compares designs on Zuni pottery with similar designs at other pueblos, particularly Hopi, that have been influenced by Zuni.  It also illustrates how Hopi artists adopted from Zuni the style of terrace rim bowls that exist today, how Lucy Lewis and family adopted, with Zuni’s permission, the use of Zuni’s heartline deer, as did Tony Da and Jody Folwell.

There is a section in the article that illustrates how members of Hopi adopted many Zuni pottery designs, easily identified in Polacca Polychrome pottery from the late 1800s, and adopted many Zuni Katsinas.  Also, because the Hopi moved and lived with the Zuni beginning in the 1860s at a time of a major outbreak of smallpox at First Mesa, which then was followed by a series of droughts and widespread starvation from 1864 to 1866 and a subsequent outbreak of smallpox at Hopi Second Mesa from 1866-1867, many Zuni customs were taken back to Hopi on their return home.

There is a section demonstrating how Zuni silver and lapidary arts influenced other artists, particularly at Hopi, Acoma and Isleta, as well as Navajo.