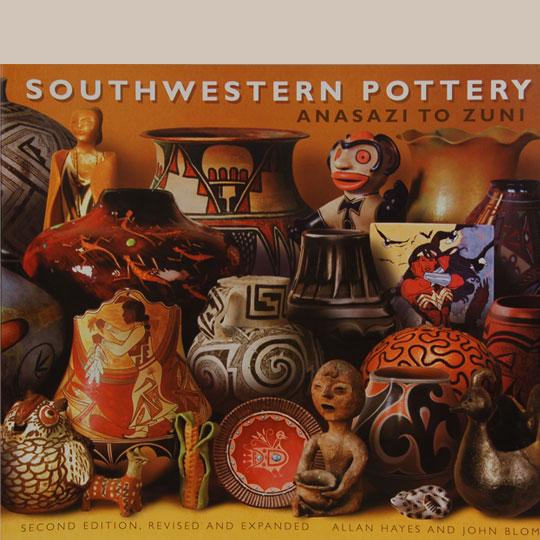 This is a complete revised and expanded version of the one first published in 1996.  In fact, it is practically totally rewritten and includes many more pottery examples in photograph representation.  Softcover, 216 pages.

Get your book AUTOGRAPHED by the Authors

Allan Hayes, Carol Hayes and John Blom will be in attendance to autograph their new book.

Alexander E. Anthony, Jr. will also be available to sign (he wrote the foreword to this book).

For more information about this wonderful book - click here

Get your copy today!

Southwestern Pottery was a classic almost from the day it first appeared.  It was Pottery 101, the basic introduction to the subject—art book, history book, reference book, fun to read, beautiful to look at, filled with good humor and good sense.  After twenty years of faithful service, it has been expanded and brought up to date with 270 color photographs of more than 1,600 pots from every pottery-producing group in the Southwest and 37 maps that explain where each of those groups live.

Disclosure: Foreword to the 1996 edition was written by Alexander E. Anthony, Jr. and it is included as well in this second edition.

This is an art book, a history book and a reference book.  It describes American’s first important art from its beginnings almost two thousand years ago to the present.  It tells the story of a craft that as far back as 600 A.D. had such attention and trade value in the Southwest that it created a thriving art market.

Its 270 color photographs show more than 1,600 pots, an array that makes this the most complete guide to the subject ever.  Yet with all that content, it’s a light, easy read, appropriate for the mildly curious as well for the serious collector.

This book is the result of an impossible quest by the authors to find one of each—an example of every type from every pottery-making Pueblo and tribe with their definition of the Southwest, a land that extends from the California coast across Arizona and New Mexico and into northern Mexico.  What they learned as they searched proved so fascinating that they felt compelled to tell others about it, and they wrote this book.

Or more precisely, this book’s predecessor.  The original edition of Southwestern Pottery, Anasazi to Zuni appeared in 1996. Dealers began telling their customers they should buy what they called the A-to-Z book, and it got so popular that it stayed in print ever since.

Meanwhile, during the twenty years after they wrote it, the authors kept searching.  They found early pieces that told the history better and twenty-first century treasures by artists who hadn’t begun their careers when the book came out. The fifteen-hundred-pot collection that provided the basis for the first edition grew to over four thousand pieces.

It was time to write it again.  Now the book is up-to-date and far more complete, but with the reader-friendly attitude it had the first time out.  Normally, a comprehensive overview of a two-thousand-year-old art wouldn’t be easy reading, but this book lets the fun the authors had shine through.  No matter how serious the art may be, the enjoyment it offers comes across page after page.

An art that much of America barely notices seduced two otherwise sane people into decades of study and collecting.  If you’re not careful, it may start you collecting too.