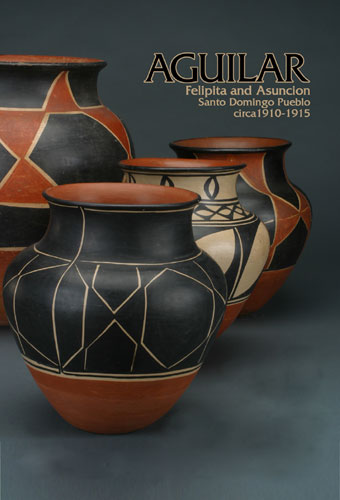 In the early years of the 20th century there lived in Santo Domingo two sisters. Their family name was Aguilar. One of the sisters, Felipita, was married to Santiago Garcia. The other sister, Asunción, was married to Francisco Caté. These women were good potters who produced the standard black on white ware of their pueblo. They had been in the habit of offering it for sale at the Santo Domingo railroad station, where at that time the Santa Fe train stopped long enough for visitors to buy from the Indians.

In 1910, or very close to that, their sales of the standard ware dropped off somewhat. Julius Seligman, who was then the trader in Santo Domingo, knew this fact. Mr. Seligman suggested to the two women that they experiment with other ways of decorating their pots, perhaps using more red than had been done. They accepted his advice and evolved two types of pottery. In one the decorated area is black with narrow white lines forming severe geometric patterns. In the other the designs are of the same type but are in red and black with white bounding lines.

Asunción seems to have preferred the style that uses black and red with white dividing lines, while Felipita apparently specialized in the style that has large black designs, bounded with white lines. At first, the new styles were not very well done, but the new technique was gradually mastered, so that by 1914 very finely executed pieces were being made.

In 1915, or possibly late 1914 or early 1916, the two potters stopped working, seemingly because of increasing age and infirmity, and the new movement came to an end. For no other potters at Santo Domingo had adopted the style, or so far have taken it up since. How many pieces of these wares were made is not known, but Mr. Seligman felt that probably not more than a few hundred were produced.

2.    Chapman, Kenneth M. The Pottery of Santo Domingo Pueblo: A Study of Its Decoration. Memoirs of the Laboratory of Anthropology, Volume I, Santa Fe, 1936.