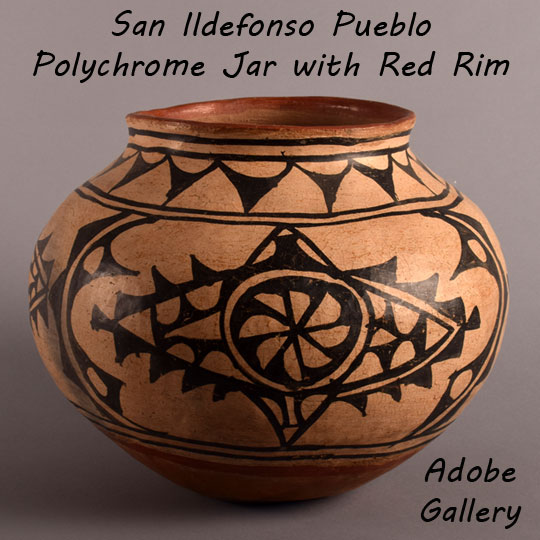 This globular San Ildefonso Pueblo Polychrome Jar with Red Rim predates the arrival of the *AT&SF train and dates to circa 1910, has Cochiti bentonite rag-polished slip, a red rim, and a red band of paint below the design panel, separating the design from the undecorated underbody.

Tesuque and San Ildefonso Pueblos are somewhat neighbors.  The people speak the same language and their historic pottery is similar in shape and design.  It is sometimes difficult to make the determination which pueblo was responsible for a specific jar.  Batkin (see reference), stated that collections made at Tesuque in the 1870 to 1880 period showed that the designs were of recent evolution.  Is it likely that Tesuque potters styled their designs on those seen at San Ildefonso?  Of course, we will never know for sure but it is quite possible that was the sequence.

San Ildefonso switched from its traditional cream slip, that required stone polishing, to the bentonite slip used by Cochiti Pueblo potters, around 1905.  Tesuque switched also, but probably did not start to do so until a decade later and some potters did not change until the 1940s.  Potters at San Ildefonso began changing the color of the rim from red to black as early as 1897.  Tesuque potters switched rim color from red to black in the 1880s.

Pottery production at San Ildefonso underwent a revitalization sparked by the arrival of tourists on the newly instituted Atchison, Topeka and Santa Fe Railway (AT&SF) cross-country train, which arrived in New Mexico in 1879.  The new pottery being produced was designated as San Ildefonso Polychrome with a beginning date of 1880 and an end date that is yet to be determined.  This newly-made Polychrome pottery was, for the most part, made to satisfy the demands of the incoming visitors, with an eye toward pleasing these buyers more so than making functional wares for use at the pueblo.  Many new designs were selected for their artistic merit.  A conscientious effort was made for making pottery that would be attractive to the public.

Condition:  examination by UV light does not reveal any repairs or restoration of this San Ildefonso Pueblo Polychrome Jar with Red Rim.

- Historic Pottery of the Pueblo Indians 1600-1880 by Larry Frank and Francis H. Harlow.