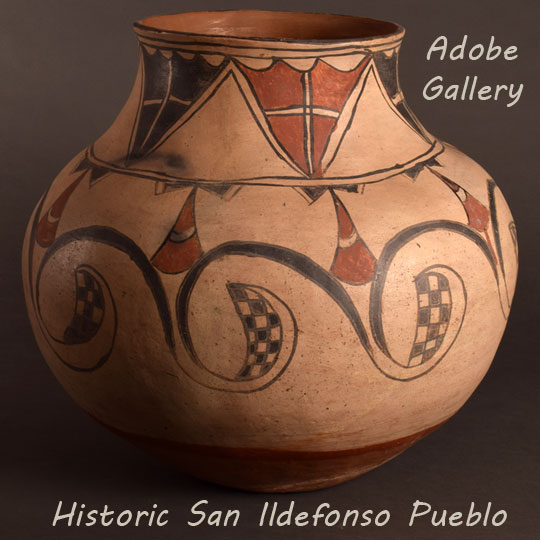 Very large pottery storage jars are relatively rare. Most households only owned one or maybe two of them, and very few were made for sale to the non-Indian market. This exceptional and rare jar has just come on the market from a private collector. It dates to the 1900-1910 time period.  According to Jonathan Batkin, San Ildefonso Polychrome typology replaced Powhoge Polychrome in the 1890s at which time red was added to the design palette.  Also, the red rim slip was replaced by black between 1895 and 1910.  Additionally, the rag-wiped Cochiti slip began replacing the stone-polished San Ildefonso slip around 1900.  Based on these clues, we have assigned a date of 1900-1910 to this jar.

The jar was constructed of native clay, hand coiled, and slipped with a rag-wiped white Cochiti bentonite slip, over which was painted the design with mineral and vegetal paints.  It has a black painted rim, stone-polished natural clay interior, partially slipped white clay body, red underbody band and un-slipped, polished base—all typical of the period.

It was Martina Vigil (1856-1916) and Florentino Montoya (1858-1918) who introduced the Cochiti Pueblo bentonite slip to potters at San Ildefonso Pueblo. They were making frequent visits to Cochiti and became aware that the Cochiti potters did not have to stone-polish the white slip they were using, unlike the San Ildefonso potters who did have to stone-polish that they were using.  The famous couple moved to Cochiti Pueblo between 1902 and 1905 and had by then already introduced the bentonite slip to the potters of their former home.

It is tempting to assume that this jar was made by Martina and Florentino because they were among the few who made large jars at that time and were the most experienced at using the bentonite slip; however, we will refrain from the temptation to say they made it but will drop the hint.

Condition:  the storage jar has undergone professional conservation to correct cracks over the body.  The jar was not broken and did not need reassembly.  It only required repairs to the cracks.