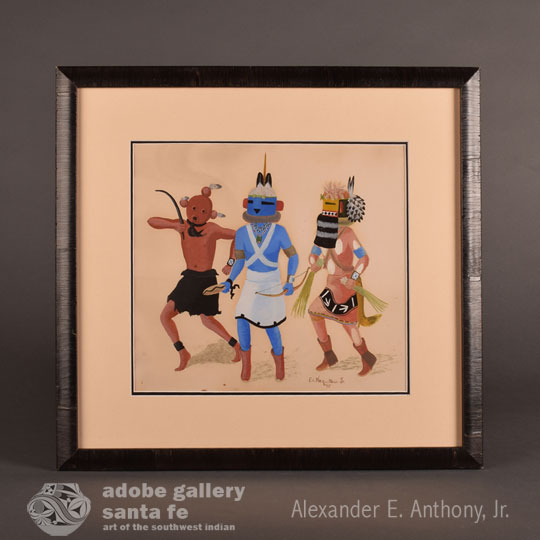 This excellent early Hopi Pueblo painting was made by Ed Nequatewa Jr., an artist whose work we had not previously handled.  The painting is dated 1938, which places the artist among the earlier Hopi Pueblo painters. It is truly an excellent painting, which might make one wonder why the artist is not as widely known as some of his contemporaries.  He is mentioned, albeit briefly, in a few of the major texts related to Native painting. Dorothy Dunn’s American Indian Painting of the Southwest and Plains Areas briefly mentions the artist, praising his skill: “Eddie Nequatewa was versatile. Two styles were his—balanced, formal decoration, and realism of small and lively Kachinas and Koyemsi. Vivid color and careful pattern were always evident in his works.”  The date and style of this particular piece suggest that the artist was a student of Fred Kabotie’s.

This untitled painting proves that Dunn’s kind words were accurate.  Nequatewa’s subjects here are two katsinam and one mudhead. The fine black outlines preferred by many artists of the period are nowhere to be seen here. Instead, the colors themselves define the figure’s bodies, with subtle shading and natural-feeling movement adding a noticeable amount of depth. The artist selected bold, bright colors that don’t appear to have lost any of their strength in the eighty years that have passed since the image was completed.  These colors seem to leap off the page, giving each figure its own visibly energetic look. This Hopi painting is rare, unique and beautiful. We hope to see more works by this talented painter.

The painting is signed “Ed Nequatewa Jr.” and dated “‘38” in lower right.  It is framed in a simple black frame underneath transparent acrylic.

Edmund Nequatewa Jr., or “Eddie,” was a Hopi carver and painter who resided in Hotevilla.  He is the son of Edmund Nequatewa, author of “Truth of the Hopi” and subject of “Born a Chief.”  According to another Hopi artist, Edmund Jr. is still alive and lives with his family at Shungopavi. His works are included in the collections of the Southwest Museum and the University of Oklahoma Museum of Art.  Nequatewa exhibited at Tulsa’s Third Annual American Indian Week in 1938, as well as a travelling European exhibit organized by the University of Oklahoma.

Condition: there is some foxing and a few small discolorations

Provenance: this 1938 Hopi Pueblo Painting of Three Katsinam by Ed Nequatewa Jr. is from a private New Mexico collection