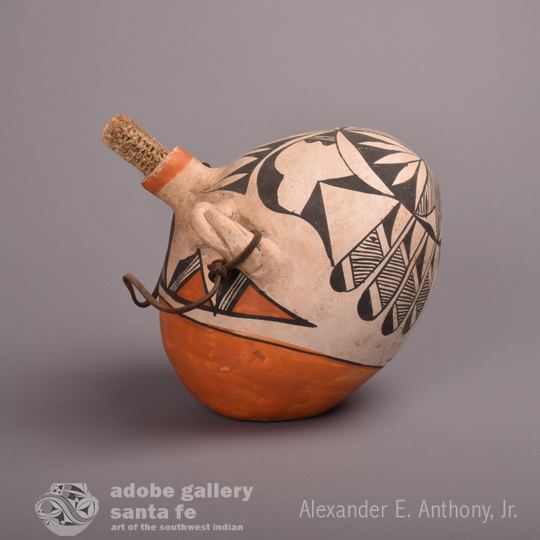 This is a most unusual and most spectacular Acoma Polychrome Canteen with Corncob Stopper, built, I believe, for actual use by its owner while working in the fields.  It is very difficult to date this piece of pottery because I have never seen a documented one of the same vessel shapes. Seen from profile, this one has an egg-like shape. I would estimate it to be from the early 20th century.

The traditional Acoma features are all present: coarse, white paste of a distinctly chunky texture, pottery shards for temper, orange-red underbody paint and rag-wiped white slip.  The decoration is a full version of a bird. Notice the head on the upper right, the legs at lower right, and tail feathers at lower left, all executed in black-on-white. The body is the medallion-like element at the apex of the canteen.

September 9, 2008 update: Emma Lewis Mitchell and Dolores Lewis Garcia from Acoma Pueblo visited Adobe Gallery and stayed for over an hour looking at pottery made by their mother and other Acoma potters. When shown this canteen, they both agreed that it was made by Eva Histia (1914 - 2005) of Acoma. We appreciate their assistance in assigning an artisan to this wonderful piece.

April 13, 2014 update (via email): "I am a grand-daughter of Eva Histia. She is very well missed. She raised me and I remember her working on her pottery all the time. All her work was all traditional handmade, from making her clay to painting her pottery with a yucca plant. I feel very blessed to have had her in my life and the memories to cherish. I just wanted to share that with you. Yes, indeed that is her work." —Jessica Histia-Autaubo

Condition: this Acoma Pueblo Polychrome Pottery Canteen with Corncob Stopper by Eva Histia is in exceptionally good condition with minor scratches from normal use.

Provenance: This Acoma Polychrome Canteen with Corncob Stopper was part of the following Special Exhibits both presented at Adobe Gallery Santa Fe: