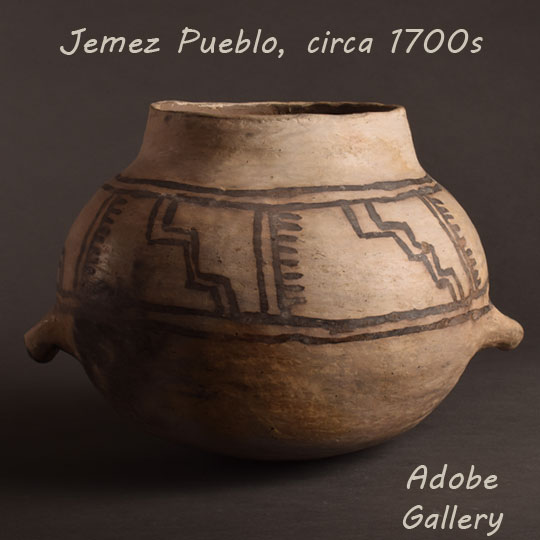 It is evident that significant pottery was produced at Jemez Pueblo in the 17th century as excavations have illustrated. The predominant type excavated was Jemez Black-on-white. After the Spanish Reconquest, production declined rapidly. Requirements for pottery at the pueblo were satisfied by imports from Zia and Santa Ana Pueblos. It was not until 1925 that a revival was attempted at the pueblo. Credit for the revival is given to two potters from Zia Pueblo, both of whom married into Jemez. The revival was neither profitable nor popular so very little was produced.

This jar is typical of Jemez Black-on-White typology from the 17th century. The style is a carry-over from the prehistoric period. Pottery from this period has simple designs executed in a single color.

As stated in Pottery of the Pueblos of New Mexico 1700-1940, "The only ceramic collected by James Stevenson and Frank Hamilton Cushing in 1879 (at Jemez Pueblo) was a canteen imported from Acoma, but upon Stevenson's return in 1880, more was available. Most of the 1880 collection (in the Smithsonian) is missing in inventory today, but remaining pieces are extremely important." Batkin1987:187

The author continues describing the remaining pottery and how it looks similar to that from Zia and Santa Ana of the time but is distinguished by the lack of basalt or sand used by those pueblos as a tempering agent.

This jar is identical in shape to the one pictured in Pottery of the Pueblos of New Mexico 1700-1940 on page 184. The vessel shape is the same and the two handles are tilted downward in both examples.

Condition: One area of blowout near the underbody occurred during firing. This has been professionally restored through proper conservation techniques.

Reference and Recommended Reading:  Batkin, Jonathan. Pottery of the Pueblos of New Mexico 1700-1940, The Taylor Museum of the Colorado Springs Fine Arts Center