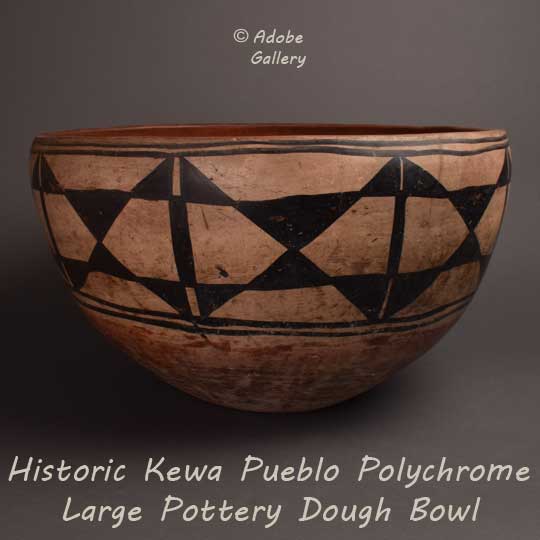 According to Jonathan Batkin (1987), the Smithsonian Institution collected very little pottery from Kewa Pueblo in 1879 and 1880, an indication that potters were making what they needed for daily use and not producing for sale to merchants or collectors.  This situation changed in 1880 when a railroad stop was built near the pueblo and potters then began making pottery for sale.  (That trading post at the railroad stop burned down and was closed several years ago but has just recently, in 2015, been restored and reopened.)

Pottery being made for use at the pueblo and pottery made for sale in the 1880s was of the highest quality and this persisted until around 1920 when few potters were producing anything of quality.  The exception was the Aguilar sisters (Felipa Aguilar Garcia, Asuncion Aguilar Cate, and Mrs. Ramona Aguilar).  Their pottery was exceptional and their designs unique.  The proprietor of the Bernalillo Mercantile Company in Bernalillo, NM was instrumental in bringing attention to these three potters and successfully marketed their works in quantity.

This large Kewa Pueblo dough bowl is probably one made in the late 1800s for use at the pueblo.  Utilitarian bowls of this size and style were not being made for sale to merchants or collectors as they seemed to desire water jars more than large bowls.  It is a traditional bowl of the time in construction, size, and design.  The main body design is a group of black triangles that form stars.  Double framing lines at the rim and near the underbody are penetrated by traditional ceremonial line breaks.  The interior is slipped in red clay that extends up to the rim.  Normally the rim would be black.  The traditional wide red band appears below the lower framing lines, dividing the decorated panel from the undecorated underbody.  There are a couple of exceptional fire clouds on the lower section.

Condition: a vertical crack has been professionally stabilized without being concealed.

Reference: Batkin, Jonathan. Pottery of the Pueblos of New Mexico 1700-1940.  The Taylor Museum of the Colorado Springs Fine Arts Center, 1987.

TAGS: pottery made for sale, Kewa Pueblo, pottery, Felipa Aguilar Garcia, Asuncion Aguilar Cate, Pottery being made for use